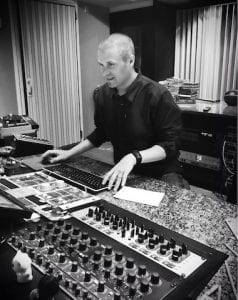 Portland, ME – July 2018…  If you’ve spent any time tuning into the Top 40 over the past couple of decades, you’ve surely heard the work of Adam Ayan. The veteran mastering engineer has been at Gateway Mastering since 1998, apprenticing under the great Bob Ludwig and soon carving out his own distinguished career, putting finishing touches on hundreds of blockbuster recordings by the likes of Paul McCartney, Shakira, Gwen Stefani, Carrie Underwood, Lana Del Rey, and Taylor Swift. He’s contributed to 42 Grammy-winning albums, earning his own Grammy Award for 2005’s The Complete Library of Congress Recordings by Alan Lomax, plus five Latin Grammys and a TEC Award.

Ayan’s credits run a gamut of genres and styles; recent work includes albums by Father John Misty, Guster, Foxygen, Amy Ray, Jonathan Wilson, and Dawes. He masters for formats ranging from CD and vinyl to digital distribution formats and even the occasional cassette project. Although the majority of his sessions are unattended, artists often make the trek to Maine from nearby New York City, Boston, and Montreal, and he’s hosted clients from as far away as Singapore, Moscow, and Peru.

Ayan notes that the role of mastering is constantly evolving: “Back in the ’60s and the ’70s, it was this technical process of getting the recording that was made in the studio onto vinyl for consumers,” he says. “Over the years, that started to change to be more creative. And I feel more creative than ever now in 2018. Clients are expecting more of that from me, and the tools are allowing for more creativity in mastering.”

When it comes to those tools, Ayan values those that are highly functional and easy to use, which lets him stay musically engaged. “Clients remark on how quickly I work,” he says. “It’s not because I’m rushing or not digging in—quite the opposite—but I get to the place we need to be quickly, and I think that that’s important because it keeps me in the musical moment, that kind of thought process, as opposed to getting mired down in the technical side.”

His studio is optimized for a hybrid workflow, though he has found his focus shift toward working in the box. And while he wouldn’t describe himself as a minimalist, he’s extremely mindful of the incremental impact each processor makes—however subtle. “In mastering, where it’s a game of inches, you’re making small moves that yield large sonic results,” he says. I’m very cautious about inserting new technology into my signal path. I’ll spend a little extra time listening to it and making sure there aren’t any sonic artifacts or things about it that I don’t quite understand.”

When Ayan layers EQs and dynamics processors, he considers the sound each piece imparts, and the Manley Massive Passive, with its metal-film resistors, film capacitors, and hand-wound inductors, has been a favorite EQ since he embarked on his career at Gateway.

“We’ve had one in each mastering room here for the entire time I’ve been here,” he says. “I started using one when I was Bob’s assistant; I fell in love with it then. It’s always been my favorite EQ; nothing quite sounds like it. It’s just very musical.”

Ayan generally places the Massive Passive in the front of his signal path: “It’s helping me create the proper frequency balance right at the get-go.” He adds that he tends to reach for the Massive Passive when he wants a broad-stroke effect. “It just seems like those broad strokes are in all the right places that yield a really great overall color and feel for what I’m trying to achieve, musically.”

“The Massive Passive, in my opinion, is inimitable,” Ayan concludes. “There’s nothing like it, in terms of what it does sonically.”