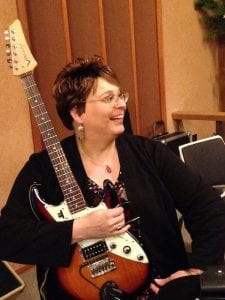 Oakland, CA—May 2019… Ashley Wai’olu Moore has spent her entire life traveling many roads of music, playing with jazz ensembles, choral groups, marching ensembles, and more. While focused on composition and guitar, Moore studied music production and engineering and​ ethnomusicology at Berklee College of Music and then forged a 25-year career producing music that garnered her 9 Grammy nominations.

Eventually, Moore’s path led her into ministry. Having earned a Masters of Divinity degree, Moore now serves as Minister of Music at the First Congregational Church of Oakland, California, where she creates a huge sound with a small praise band using Deskew Technologies Gig Performer software as the heart of her live performing rig. Gig Performer is a platform that hosts Moore’s virtual instruments and processors, routes and mixes audio, manages and processes MIDI controller input, controls external MIDI devices, and reconfigures all of those functions as needed for each part of every song.

“When I decided to leave my career in production and go to the seminary, I thought I was leaving the music industry behind,” Moore recalls. “Ironically, I started doing even more music working for a congregation.” She found the musical and technical demands of music ministry at least as complex as those of her earlier, more secular musical situations, if not more so.

While functional on keyboards, Moore is primarily a guitarist who leads worship while simultaneously directing the choir and praise band. “I love the huge sound of modern gospel but our band is just three pieces: me, a bassist, and a drummer,” muses Moore wistfully. “I wanted to make the sound fuller; I wanted the same tools a keyboardist might have.” 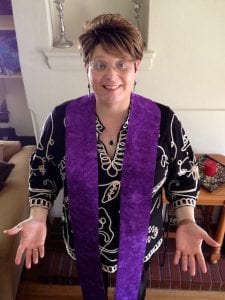 Guitar synthesis seemed a good answer but hardware and software systems she tried fell short. Moore discovered Gig Performer while prowling online forums. “I downloaded the demo and within a week thought ‘Now this is something I really like.’ I love being able to define the widgets I want and receive clear visual feedback about what’s going on in my configuration.” (A Gig Performer widget is an onscreen control mapped on one side to a plug-in parameter and on the other side to a physical or touch controller.)

Moore’s complex setup is centered around a Line6 Helix Floor she uses as her main audio interface. The Helix was the master system controller, calling rackspace variations in Gig Performer to get different sounds until version 3 of Gig Performer introduced the ability to build setlists of songs, with each song part loading a different rackspace or variation. (A Gig Performer rackspace is a complete configuration of plug-ins, including all MIDI and audio routing and processing. Variations are stored rackspace presets.)

Now, Gig Performer is the master, switching rackspaces and sending MIDI program changes to call Helix snapshots. “One of the beauties of Gig Performer is that once I program a song, I can export it and the patch and all changes I make are remembered, so if I need to load it back in, I don’t have to reprogram those, which I had to do before,” Moore details.

Moore plays a Line6 Variax JTV-69 guitar fitted with a Fishman Triple Play pickup to drive virtual instruments, using its Variax Digital Interface to run modeled guitar pickup signals and standard pickups as two different audio streams. A song part in a Gig Performer setlist can call a Helix snapshot to change the model or tuning of the guitar, as well as change the sensitivity of the MIDI pickup. Her Livid Instruments Guitar Wing wirelessly controls Gig Performer and triggers loops, clips, or stems. A Roland V-Combo VR-09 keyboard on the side gets used for underscoring other parts of the service with pads and chords, and a Novation Launch Control XL provides additional controls. Gig Performer handles MIDI input from all of these.

Moore makes extensive use of widgets for parameter changes. “I’ve designed my rackspaces to have all of the controls I might want linked to widgets, which I control from expression pedals,” she explains. “As a guitar player with my instrument in hand, clicking on the screen to drill down and tweak patches is really frustrating. I wanted to use widgets as much as a programming interface as for anything else.”

The Guitar Wing steps her through song parts, and she sets expression pedals in Gig Performer to crossfade through different sounds in Spectrasonics Omnisphere. “I can do a great amount of sonic manipulation just with my foot,” asserts Moore, “so I don’t have to think about switching a lot of things when I’m playing, singing, and directing.”

Gig Performer’s Rig Manager simplifies remapping widgets to different controllers when Moore switches from her home office setup to her church worship rig. “The Rig Manager is a godsend for that. I can save each setup as a template that includes the Rig Manager configuration, so I don’t reprogram anything when I move between setups.”

Moore credits Gig Performer for letting her effortlessly manage her complicated setup in real time. “It’s rock solid, has a very small hit on CPU cycles, and offers lots of features,” she relates. “Gig Performer is simple, intuitive, and powerful. And it just works.”