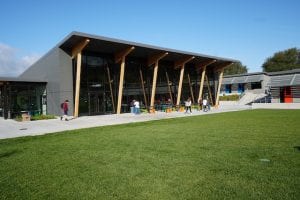 Danville, CA—April 2019… With its international student body and emphasis on intellectual curiosity, multiculturalism, and community involvement, the Athenian School is unique in the San Francisco Bay Area. Originally a boarding school, Athenian now also welcomes day students from 30 Bay Area cities to its Middle and Upper Schools. The private institution’s name derives from founder Dyke Brown’s vision of a school with the goals of Periclean Athens, emphasizing the full development of each citizen physically, intellectually, aesthetically, and morally.

“This is a very large room, about 120 feet in length and 60 to 70 feet in width,” describes Marshall. “One side is glass, and the ceiling is very high. Two-thirds of the room make up what we call the Right side of the room, and the other third is the Left room. They can be united, with an integrated sound system, or split into two spaces with separate sound systems. We installed a floor box on each side with identical input configurations, including Attero Tech unD6XIO-BT and unDX2IO+ Dante-networked wall panels. When they open the wall and use the space as one large room, they can use both floor boxes and all four Attero Tech panels.”

Each Attero Tech unDX6IO-BT Dante-networked plate has stereo 3.5 mm and RCA inputs and Bluetooth input, all of which can be used simultaneously as independent streams, although as a practical matter the school uses one set of inputs at a time. The unDX6IO-BT also has 3.5 mm stereo output. “By default, whatever comes out of the loudspeakers also comes out of the Attero Tech outputs in that section of the room,” Marshall recounts. “But they can change that in software so if they want to use the outputs as monitors —say they just wanted to have a singer singing through monitors—they could do that.” 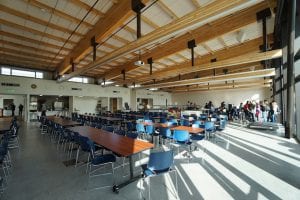 The Attero Tech unDX2IO+ provides two balanced mic/line XLR inputs, two balanced XLR line outputs, and another two balanced line inputs on de-pluggable connectors on the side of the unit. As with the unDX6IO-BT, the inputs and outputs can be used simultaneously, and all audio channels are available separately. “The two unDX2IO+ units give them microphone inputs, or they can hook up mixers,” adds Marshall. “They also have a wireless microphone. And they can use the 3.5 mm outputs from either unD6XIO-BT and the XLR outs from either unDX2IO+ for recording.”

The unD6XIO-BT’s Bluetooth implementation is so good that it even impressed Marshall, an industry veteran. “The floor box in the Right side is approximately in the middle of cafeteria,” he notes, “and when I connected my phone to the unD6XIO-BT in that floor box, I could walk anywhere in the cafeteria and not have a single signal drop. Normally Bluetooth can go about 35 feet. I guarantee you, I was way beyond 35 feet and was still connected to that unD6XIO-BT with no problem. I went out into the lobby, and it wasn’t until I got to the very far corner that the Bluetooth started cutting out. I was at least 60 feet away. In the Left floor box, I went all the way over the corner as far away as I could get before it cut out. I could go anywhere in the cafeteria. And that’s with room full of kids, equipment, chairs, and tables. The Bluetooth just worked. I was very pleasantly surprised.”

Because Marshall specified Dante-enabled Attero Tech panels, he designed the whole audio system to take advantage of the Dante digital audio protocol. “Since we already were giving them Dante,” he adds, “we gave them an extra RJ45 jack in each of those floor boxes to connect a Dante-enabled Midas M32 mixer. That way, they can have bands and other events that require more inputs. Each side also has an HDMI wall plate and an iPad for controlling the rooms. Large biamped Community loudspeakers with QSC amplifiers in each section deliver excellent sound, and a Biamp TesiraFORTÉ DAN AI DSP with Dante manages the system. The Dante system was a bonus for the cabling contractor, too, because they’re more used to wiring IP networks than AV, so they prefer to pull CAT5 rather than copper cable with XLR connectors.”

Kate & Dyke Brown Hall and its newly equipped cafeteria are now open and in use for the Fall semester. “The client has been very happy with the system at Athenian School,” Marshall reports. “Scott Levine and the AVD team did a great job on the install. The two sets of Attero Tech unDX6IO-BT and unDX2IO+ panels provide reliable, flexible connectivity that fully meets the customer’s needs. And now that everything’s up and running, it sounds amazing.”