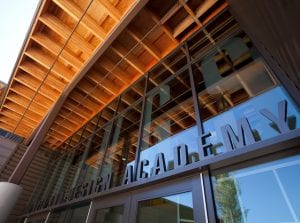 South Lake Tahoe, CA—January 2019… The Tahoe Arts and Design Academy at South Tahoe High School is a reflection of how schools are responding to the instructional demands of digital media. In 2011, TADA added a 10,000 square foot media production facility to go with its existing 15,000 square foot performing arts center. The pace of technology being what it is, by 2018 a technological upgrade was needed.

The academy is modeled on a Hollywood studio, but, as a high school resource, often needs to accommodate teachers or students using content residing on their smartphones or tablet computers. TADA addressed the issue of moving wireless streams from a mobile device onto the academy’s Dante network backbone, by installing Bluetooth-enabled wall plates from Attero Tech.

The new building expanded on the Dante network installed in the original PAC construction, which runs over fiber between main areas, and from there over CAT6 cable to machines within those areas. A SAN network allows video editing systems to share HD footage at high speed. A QSC Q-SYS system anchored by a Q-SYS Core 510i processor provides management and processing power. 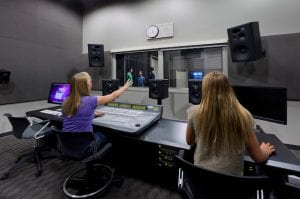 Convenience also made the unD6IO-BT attractive to Covey. “Attero Tech had the best form factor for their solution. Most of the other Bluetooth solutions had an external ‘hockey puck’ device that needed to be plugged into an additional piece. Having it all built into one made the Attero Tech wall plate a convenient solution.” In addition, the unD6IO-BT’s 3.5mm stereo input jack made it just as easy for users with computers or older devices still bearing headphone jacks to put content onto the network. Covey felt that the unD6IO-BT placed everything in the wall, a more secure arrangement than solutions using a small, external device.

In the smaller rooms, Covey installed a total of four unDIO2x2+ Dante-networked audio interfaces, which feature two balanced mic/line inputs with phantom power and two balanced line outputs. In rooms hosting Crestron video systems, analog audio from the Crestron reaches the network through the unDIO2x2+’s inputs, while in two of the rooms, the outputs feed signals to QSC K12 active loudspeakers. In larger spaces, the interfaces accept input signals that get routed over the network to QSC amps driving passive Tannoy cinema loudspeakers.

The three pairing modes available in the unD6IO-BT handle the flow of different users’ devices in the spaces. “In classroom spaces used by the same teachers over and over, we set the unD6IO-BT so their devices automatically pair with the wall plate, while devices in the public spaces get connected only when they are needed, and we control pairing with a Crestron panel,” details Covey. 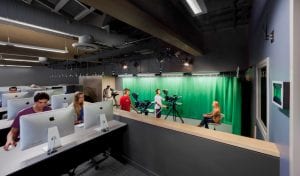 With the media arts facility online, Covey is looking ahead to his next set of improvements, such as making the SAN network capable of handling 4K video. To meet more particular needs, however, Covey will again turn to Attero Tech. “Attero Tech makes a lot of products that work well for niche projects,” he states. “The product I’m looking at now is the unHX2D HDMI audio to Dante interface, which would work well in one of the spaces where we are installing a Crestron video system that has only HDMI output for audio.”

Covey is also eyeing enhancements, including adding Attero Tech Bluetooth wall plates, to sound systems in campus buildings beyond TADA. “It’s been such a nice feature to have Bluetooth and other connections all in one place, and the wall plates seem to be reliable and very easy to use. Adding those wall plates in other buildings shouldn’t be too difficult and will greatly expand our capabilities.”