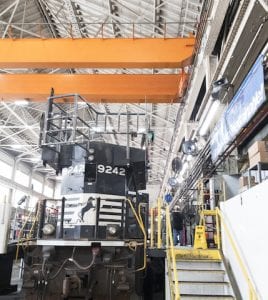 In October 2016, a disgruntled former employee of FreightCar America entered the rail car manufacturing plant and shot and killed one employee and wounded three others before killing himself. This incident prompted Norfolk Southern to augment its safety plan, including the addition of a new, campus-wide, multi-building emergency paging system designed and installed by Roanoke systems integrators Stage Sound.

Stage Sound VP of Design and Installation Brian Taylor designed the new paging system, utilizing the facility’s aging IP network. Key to Taylor’s design were ten Attero Tech unDIO2x2+ Dante-networked audio interfaces. “The Roanoke Shops has a 100 megabit network over CAT5 cable, so the bandwidth is very limited,” relates Taylor. “It would have been very difficult and expensive to upgrade the whole network; we’d have to run new cable outdoors through gravel and underneath railroad tracks, just to start. We can use Dante but it’s limited to 32 channels; right now there’s a maximum of 10 paging channels. Even then, Norfolk Southern had to run some new conduits and wiring and replace old switches in order to get the latency below 5 ms, which is the most Dante can work with.”

The new paging system has 10 logical zones and operates across 8 buildings. Most of the zones are quite large; the main area of the Locomotive Shop includes 3 spaces, each of which is 600 feet long by 80 feet wide, with 2 rail lines running down the center to accommodate locomotives. Another zone covers a six-room office complex.

“The distances are huge,” offers Taylor. “Norfolk Southern is installing the paging horns and pulling the wire, and we’re doing the amp racks, including the Attero Tech panels, as well as the programming. We’re using a Symetrix Prism 4×4 DSP, and the outputs for two local paging zones come straight off of the Prism. Then, rather than run audio or speaker cables 800 to 1,000 feet, we’re using the existing network for the other zones. In each location, we put an amplifier rack with one or two Attero Tech unDIO2x2+ interfaces that feed one or two QSC ISA300Ti power amplifiers.” 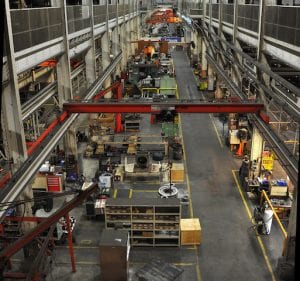 The Attero Tech unDIO2x2+ is a flange-mount, 2-in, 2-out Dante-networked interface with 3-pin depluggable I/O, switchable mic/line gain and 48V phantom power on the inputs, and software adjustable output volume control. Audio flow assignment also can be controlled over the Dante network. However, at Roanoke Shops, the unDIO2x2+ interfaces are only used for outputs to the amplifiers. Currently, the system just has one audio input, which is analog. “Their internal phone system uses an old Bogen analog paging interface, so we routed that into the Prism,” Taylor details.

The new emergency system feeds 10 logical paging zones, spread across the eight buildings. “In some cases a logical paging zone might have two or three types of loudspeakers,” observes Taylor. “We use Atlas FAP43T-W and SM42 speakers in offices, Atlas APC-30T horns in the enclosed shops, and Atlas CD94/PD60ATs for larger outdoor areas. I’m using separate Dante channels for each feed to a different loudspeaker type so that I can equalize and process them properly, even though they’re in the same logical paging zone.”

Stage Sound had successfully used Attero Tech panels on previous projects with Symetrix DSPs, so it made sense for Taylor to choose the unDIO2x2+ for the Norfolk Southern install. “We use a lot of Symetrix DSPs, and our sales rep at Cardone, Solomon & Associates, which handles both lines, told us about Attero Tech,” he comments. “We like that Attero Tech products integrate seamlessly with Symetrix Composer software, and we like their convenience and form factor. And Attero Tech products have been very reliable and straightforward. We’re pushing the network’s limits at Norfolk and Southern, we’re still bringing zones online, and we haven’t needed tech support.”