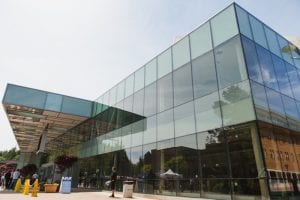 Bellingham, WA—August 2018… With 15,000 students, Western Washington University provides the faculty access and focus on students of a smaller college but with the academic choice, resources, and diversity of a large university. In August 2017, WWU completed a major renovation of its 1959-vintage Sam Carver Gymnasium building, the home of the school’s 15 intercollegiate varsity sports. In addition to expanding the building with new classrooms and other spaces, the university gutted and remodeled the main gym, adding a new sound system designed by West Coast engineering firm PAE Engineers. Mount Vernon, Washington, AV communications firm Dimensional Communications refined the design and installed the system. Built on a Dante network, the new sound system accepts audio via multiple Attero Tech unDX4I and UND3IO audio I/O wall plates.

Established in 1973, Dimensional Communications boasts a variety of prestigious projects, including an extensive AV system for CenturyLink Field, home of the NFL Seattle Seahawks; a new audio system for Seattle’s famed Benaroya Music Hall; a major install at Microsoft’s Building 92; and projects for an assortment of educational institutions. “We’ve used Attero Tech plates in previous installs, including another school, but this was one of our largest Attero Tech installs so far,” notes Dimensional Communications Senior Project Manager Dan Cann. “At Carver Gym, we started out with a design from PAE Engineering that specified a lot of Attero Tech panels, and although we modified the design based on client feedback, we retained the Attero Tech products.” 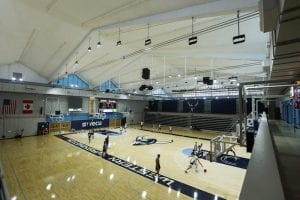 The Dante audio network is entirely in the gym, although it could link to the building’s overall network. “Attero Tech wall plates are used for pretty much all audio in the gym, including the broadcast feeds,” Cann reports. “We put a bunch of Attero Tech plates throughout the gym. For example, we have them at the announcer table for sending announcements and program audio to the system.”

A BSS Soundweb London BLU-806DA DSP with a BLU-326DA I/O expander manages the Dante flow, and the gym is equipped with a Soundcraft Performer 3 digital console with Dante card. The Dimensional team set up several subsystems that connect to the network, each equipped with Attero Tech plates and providing user control from Crestron TSW 750 touch panels.

The more extensive System B includes a pair JBL line arrays and an assortment of EAW loudspeakers, along with wireless headsets, a Shure SCM268 audio mixer, a pair of Shure VP82 shotgun mics, and multiple camera systems. Audio access is via 12 Attero Tech unDX4I Dante-networked wall plates, each of which provides 4 balanced mic/line XLR inputs, as well as 2 balanced line outputs on Phoenix depluggable connectors.

“The gym is a big space, and there’s a lot of I/O,” observes Cann. “Dante and Attero Tech make a big system like this much easier to install and manage than with an analog system. Instead of using a lot of patch bays and D/A converters, with the Attero Tech plates and Dante Manager, we can route the audio flow to the locations we want over CAT5 cable, control phantom power per input, and place inputs wherever we need them. Routing is super simple. And we had no latency issues, which is a common concern in digital systems. When you start figuring the amount of cable, labor, and hassle of an analog system, compared to the ease of use and flexibility of a Dante system with Attero Tech wall plates and CAT5, it’s worth going digital.”

Cann especially appreciates the control advantages of Attero Tech wall plates. “When we started working with Dante networks, one thing we didn’t like about other plates is that they didn’t give you remote control of the preamp gains,” Carver relates. “Attero Tech gives you software control of the gains over the network, as well as control of the audio flow and phantom power, which is really nice. As a result, at Carver Gym, it was easy to give the client gain control using Crestron touch panels. Overall, we appreciate the ease of use with Attero Tech, and we’ll use their panels again in future projects.”