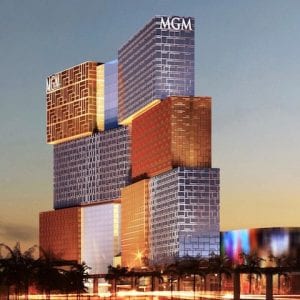 Macau, China—May 2018… Located just off Macau’s Cotai Strip, the new $3.4 billion, 35-story, 1,390-room MGM Cotai hotel-casino conjures visions of stacked, multi-colored jewelry boxes. MGM’s second major hotel-casino in Macau is even more stunning inside, with a unique collection of over 300 pieces of contemporary art, Asia’s first adaptive and dynamic theater, nine unique restaurants and bars, and The Spectacle, a four-story atrium the length of a football field that features 25 LED video walls. Accommodations range from standard rooms to suites, Skylofts, and Mansion Villas for VIPs. There’s a 9,000 square-foot ballroom, the world’s largest art garden, an extensive spa, and VIP rooms for junkets, as well as 5,000 square feet of retail space.

The audio systems for the MGM Cotai’s VIP rooms and Tria Spa are accessed using 37 Attero Tech unBT2A Bluetooth audio wallplates, specified and installed by Hong Kong systems integrator Vega Technology Ltd. “The Attero Tech unBT2A is a simple, yet powerful Bluetooth audio receiver that is easy to install and has a nice, clean look,” comments Vega Technology’s Rafael Tsang. “One of the biggest challenges at the MGM Cotai was that the interior designer did not want to see the panels. The unBT2As offer remote pairing activation and monitoring using RS232, instead of pair matching by touching a panel button, so they could be hidden in the ceiling. We remote-control them with a Crestron program.”

The Vega Technology team initially was concerned about a possible coverage drop due to mounting a Bluetooth receiver in the ceiling. “But the Attero Tech unBT2A’s performance didn’t disappoint us at all,” Tsang recalls. “It pleasantly surprised us with full coverage in each room.”

Another major advantage is that the unBT2A can be powered over Ethernet from the control room. “The unBT2A’s simple signal flow made the design procedure effortless,” praises Tsang. “We only needed to figure out how to lay an Ethernet cable from control room to destination; we didn’t have to worry about remote power or signal disturbances. This is a great feature for the client, and they love it.”

The final major client concern was stability, and again the Attero Tech panels came through. “Since we installed and tested the unBT2A units, all of the devices have functioned normally,” confirms Tsang. “Without a doubt we give it a thumbs up for stability.”

With the success of the MGM Cotai install, the Vega Technology team is sold on the Attero Tech unBT2A. “The unBT2A has given us great satisfaction,” Tsang concludes. “For our next project that requires a Bluetooth receiver, we would definitely recommend Attero Tech.”