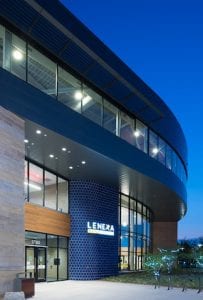 Lenexa, KS—May 2018… Founded in 1869 on land formerly occupied by the Shawnee tribe, and named for the widow of a Shawnee chief, Lenexa has evolved into a well-rounded community of more than 52,000 people. Located on the southwest side of Kansas City, Kansas, along the route of the old Santa Fe Trail, Lenexa looks to the future, having created a Vision 2020 development plan in 1997 and an updated Vision 2030 plan in 2008. Vision 2020 called for a central city center that has at last been realized in the all-new Civic Campus, which includes City Hall, the Lenexa Rec Center, a Public Market, the Lenexa Commons outdoor area, and a parking garage. A library will eventually complete the site.

The city contracted with systems integrator CCS Presentation Systems, which has a branch in Lenexa, to design, install, and maintain the AV systems for the new Civic Campus. The campus is served by a Dante-enabled audio network that users access via Attero Tech unD6IO-BT 4×2 audio wall plates with stereo Bluetooth audio inputs.

“The majority of the spaces with Attero Tech wall plates are in the new three-story Rec Center,” notes CCS Senior Engineer Stan Nice. “The Rec Center has two gyms, a Kid Zone, group fitness rooms, an indoor pool, and a yoga terrace. There are two public presentation spaces. The main gym is like a typical high school gymnasium, with a double-size basketball court. The other gym is the Activity Gym, and it is designed for roller hockey, which is a big deal in Lenexa. The standard for the building is a Sennheiser wireless microphone and an Attero Tech unD6IO-BT bluetooth wall plate. The gyms, the yoga terrace, the group fitness rooms, and the Kid Zone all have the same system. It’s all about giving an instructor the ability to play music quickly and easily, in a way that’s familiar to them. The system also provides emergency paging.”

A 25-year AV industry veteran, Nice has bridged the transition from analog to digital systems, from his early work as an intern at a television studio to his current tenure at CCS. “I decided that integration was really what I loved to do,” he professes.” He discovered Attero Tech wall panels when designing a system for a large local company and was sold on the technology. “We wanted a way to provide analog wired input and Bluetooth input into a Dante network,” he recalls, “so when Attero Tech introduced the unD6IO-BT, we got a demo, and we liked it a lot. To be honest, it was the only viable Bluetooth solution that did what we needed and didn’t make us crazy. The unD6IO-BT worked well for us on the previous project, so we chose it for the Civic Campus project.” 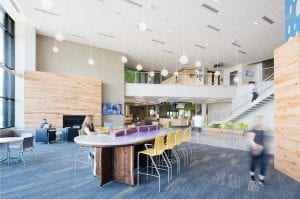 The Public Market area is also equipped with an Attero Tech unD6IO-BT wall panel. “The Public Market is really cool,” Nice enthuses. “It’s a big room with eight vendor booth areas, like a very hip and trendy, East Coast-style indoor plaza. They can have coffee shops and popup vendors who want to launch products or get their catering business off the ground. They intend to do launch parties and other events, so their audio requirements are a microphone and music playback. The unD6IO-BT lets them play music via Bluetooth or they can plug in to the wall panel’s stereo RCA inputs or the 1/8-inch line inputs.”

The Dante network is driven by two QSC Q-SYS Core 500i DSPs and employs QSC amps and speakers in spaces that will support them. The outdoor plazas have a mix of SoundTube planter speakers and QSC speakers.

“This new civic center has been a 14-year project for the city, and it was fully prefunded for construction,” Nice relates. “They did it right from a city standpoint. We’re really happy to be part of it. We’re not just designing and installing systems; we’re partners three years, five years, and ten years down the road. We tell our customers that the only thing we guarantee about technology is that technology breaks. It’s how we fix it that makes us different. Remotely manageable technology like Attero Tech is what enables us to be different.”