AtteroTech Handles the Ins and Outs of Ambience Enhancement in Suhl 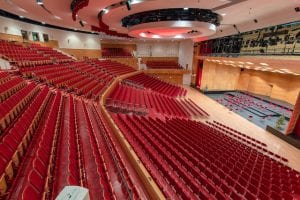 Suhl, Thuringia, Germany—April 2019… Nestled in the Thuringian Forest in central Germany, the city of Suhl became part of East Germany after World War II. In the 1970s, Suhl’s downtown area was remodeled and a new civic center complex constructed. The reunification of Germany in 1990 brought reconstruction and expansion that resulted in today’s Congress Centrum Suhl. At the heart of the complex is the 2,350-seat Great Hall, which hosts a wide variety of productions, ranging from amplified and acoustic concerts to theater to dance, and even seminars.

To better serve the broad spectrum of events, an Amadeus Active Acoustics system was installed to allow optimization of the Great Hall’s acoustics for each type of event. Acoustical enhancement systems like Amadeus’ require the use of many signal paths, coming into and going out from the system, all of which need to be routed and converted between the analog and digital domains. MediasPro Medientechnik GmbH, systems supplier for the project, provided high-quality, networked interfaces from Attero Tech to handle the I/O requirements and route signals over a newly installed Dante™ network going to and from the Amadeus Core digital signal processor at the heart of CCS’s Active Acoustics system.

A carefully placed grid of 14 Audio-Technica microphones, 7 above the stage and 7 over the audience (to pick up the room reverberation), feed into an Attero Tech Synapse D16Mio Dante-networked audio interface. The D16Mio houses 16 studio-grade microphone preamplifiers based around THAT Corporation technology, each preamp offering switchable P48 phantom power and a full 51 dB of gain. The phantom power, preamp gain, and input sensitivity can be controlled over the network or directly from the front panel. 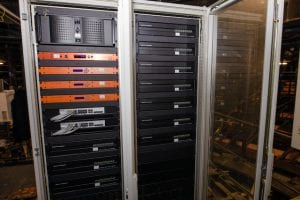 The Amadeus system uses many more loudspeakers than microphones, so CCS needed numerous independent outputs to feed the 80 channels of amplification in the system’s 10 Bittner 8X100 power amps. Three of Attero Tech’s unD32 Dante-networked interfaces more than covered the need, as each unD32 unit provides 32 analog outputs in a single rackspace. Important to the precise level calibration needed for each speaker, unD32 outputs have volume controls adjustable in 0.375 dB increments. Should even more analog outputs be needed for any reason, 16 more line-level outputs are available on the Synapse D16Mio.

The system was installed and commissioned in time to premiere it on New Years Eve at a concert by the Prague Festival Orchestra and was a clear success. “The Congress Centrum is quite pleased with the performance of our new reverberation enhancement system,“ reports CCS Managing Director Diana Schneider. “We have had many visitors tell us they had a special sound experience in the hall and thoroughly enjoyed hearing music there. I am grateful to everybody involved with the project for their very competent project design and implementation.”