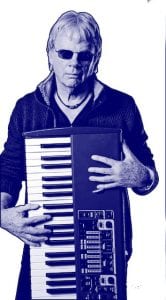 Bremen, Germany—February 2019… Blue Weaver emerged from Cardiff, Wales, to take the keyboard chair with the early British rockers The Strawbs when Rick Wakeman decamped for Yes. He never left. In 2019, Weaver plans to be part of The Strawbs 50th anniversary concert in New Jersey, along with Wakeman, Larry Fast, John Hawken, a 30-piece orchestra, and a 40-piece choir.

Over time, of course, Weaver squeezed in a few things beyond the Strawbs, like an American tour with Mott the Hoople and a young opening act called Queen, as well as a prime spot at the core of the Bee Gees’ band through six of their greatest years: the Saturday Night Fever period. In 2019, Weaver is reaching back to the vintage sounds he created on those Bee Gees hits to play in Massachusetts – The Bee Gees Musical, which tours Europe five months of the year. “I’m re-creating the sounds I used on all the Bee Gees records,” Weaver explains, “because the show that we do is the life story of the Bee Gees from the early days up until the last song they recorded together, as well as some of the hits they wrote for other people.”

Deskew Technologies’ Gig Performer enabled Weaver to do the last three Massachusetts tours with a rig consisting only of a Yamaha CP4 Stage Digital Piano, a Korg nanoPad2, and a Mac mini running Gig Performer, which hosts, controls, and mixes all his virtual instruments. Weaver’s world is greatly simplified with Gig Performer providing all of his sound, including processing and mixing. “I do all of my balancing within Gig Performer and send a stereo output to the sound system,” discloses Weaver. “It means I have control, and the front-of-house engineer doesn’t have to worry about me so much.”

The CP4 is used solely as a weighted, 88-key controller and is housed in a custom road case that also integrates the Mac mini, an RME Babyface interface, and a small Toguard HDMI monitor mounted flat on top of the CP4 keyboard. In Gig Performer, Weaver constructed a rackspace for each of his principal instruments. 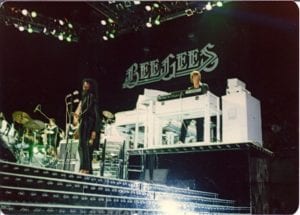 A Gig Performer “rackspace” is a complete configuration of plug-ins, including instruments, processors, mixing, and routing, plus routing and management of physical controllers. Gig Performer 3 adds the ability to create set lists of songs and can switch rackspace variations for each song part.

Weaver’s most important rackspace contains both Waves Grand Rhapsody and Modartt Pianoteq VIs, which he switches between on an as-needed basis for acoustic piano sounds, his single greatest need. Weaver points to Gig Performer’s CPU efficiency as the reason he can keep both powerful instruments instantly available. “There’s so little CPU overhead with Gig Performer, it’s great!” he proclaims. “I can have both instruments loaded and can turn the volume down on one to hear only the other.”

A second rackspace contains Waves Electric 88 and Pianoteq emulations of the Fender Rhodes, which he mixes for “How Deep Is Your Love?” to combine warmth from one with a good tine sound from the other. Another rackspace is a harpsichord sound built from a mix of the Pianoteq Harpsichord instrument and Waves Clavinet. Other rackspaces hold synth sounds like the ARP2600 sound (four instantiations of Arturia’s ARP2600 V) for “Jive Talking” and an Oberheim 8 model provided by Arturia’s SEM V. A heavily compressed and processed piano sound for “Tragedy” occupies another rackspace.

Weaver uses Gig Performer widgets, which map physical controllers to plug-in parameters, to adjust the volume on each instrument. He then connects audio outputs from all of the instruments to the same interface output in Gig Performer, where they are mixed before being sent to the outputs. This setup is effective and very fast to set up, but lately Weaver has been checking out Gig Performer’s 4-, 8-, and 16-channel mixer modules as a more elegant solution. Weaver also created widgets to control basic reverb parameters. 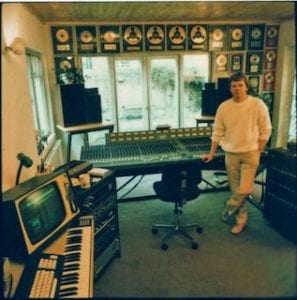 As the Strawbs reunion approaches, Weaver is preparing by customizing his rig. “I am creating a new Gig Performer gig document for the Strawbs 50th Anniversary concert in April,” he notes. “It has piano, GForce’s M-Tron Pro Mellotron, and GG Audio Blue 3 organ, hopefully with full control of drawbars on ​the B3 plug-in and of the Leslie, as well as many other controls I need.” He’ll also connect a new MIDI In block in his rackspaces to accommodate a Roland AX Edge keytar.

Weaver insists that Gig Performer’s “patch cord” connection system is key to assembling his new system quickly, “I come from the ‘70s, when, if you wanted to connect something in the studio, you used a patch cord,” he recalls. “I love that way of doing things, and in an analog studio, that’s exactly the way everything was connected. To be able to do that now digitally on a screen is amazing.”

In the final analysis, Weaver relies on Gig Performer because it checks all the boxes on his list. In fact, he confirms, “Gig Performer does everything I need it to do, reliably, in a way that is easy to understand when I’m setting it up.”