Boston Diners Eat to the Beat with Fulcrum Loudspeakers 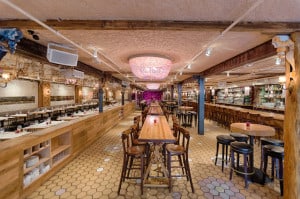 Cambridge, MA – April 2015… Located in the heart of trendy Harvard Square, Beat Hotel is not a hotel at all, but a restaurant, bar, and music venue. The Cambridge hot spot draws a busy crowd and presents a regular roster of jazz and world music, and the venue’s acoustics present some unique challenges.
“The room has 9-foot ceilings and is over 100 feet long,” explains Rob Pemberton of Wellesley, MA-based Parsons Audio, the company behind the creation of the venue’s new sound system. Centered around Fulcrum Acoustic’s club-ready Prophile Series loudspeakers, the system is designed to deliver exceptional audio with accuracy and control, while still allowing conversations to happen throughout the venue.
The primary PA consists of a pair of Prophile M speakers, a 12-inch, 3-way coaxial speaker with wide dispersion. “We chose the Prophile because of the layout of Beat Hotel, which is on the basement level of the building,” explains Pemberton. “The Prophile has a nice, tight pattern control, so we were able to focus the sound without creating a lot of reflections.” The main PA is augmented by a series of delay zones further into the room, with all loudspeakers ceiling mounted. 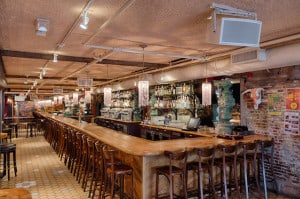 Two Fulcrum Acoustic US212 subwoofers are flown alongside the main PA, positioned in cardioid pattern to control low frequencies on stage while radiating freely into the room. For the musicians, the stage itself features FX896 ultra-compact floor monitors, also by Fulcrum Acoustic.
The main seating, including both the restaurant and bar areas, is divided into three zones (four counting bathrooms), delayed through the room’s BSS BLU-160 processors to maintain time alignment throughout the space. A total of ten Prophile S loudspeakers cover these zones, each of which has volume control to allow management to adjust to conditions during and between sets.
With a 3-way, dual 8-inch design and extra-wide 100×100-degree dispersion, the Prophile S is ideal for musical applications like front fill and under balcony – or a low-ceilinged club like Beat Hotel. “The Prophile S speakers were a great fit for the zone speakers,” notes Pemberton. “They have a nice, wide pattern, low horizontal profile, and a beautiful sound. It allows the manager to change the volume in each zone without upsetting the balance in the room.”
Beat Hotel definitely revels in being a little different, as is apparent from the venue’s interesting, eclectic music and ever-changing menu. To save space, the mixing console is hidden backstage, with the engineer controlling the sound via an iPad. “The room really sounds great, even with the low ceilings,” concludes Pemberton. “The, Fulcrum system was the perfect choice for this space.”