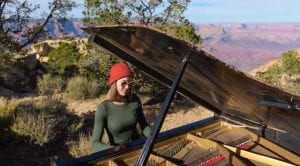 Los Angeles, CA — February 2019… Singer-songwriter Brenda Carsey’s musical and life partner Will Munroe had been experiencing a recurring dream of playing piano outdoors to honor nature’s most beautiful spaces. In October 2018, the pair turned that dream into reality, transporting an acoustic baby grand to Arizona’s Moran Point, which offers a stunning vista of the Grand Canyon. To ensure their video of the project would have exquisite, pristine audio, they brought TASCAM’s flagship recorder, the DR-701D, for single-shooter video production, along with four TASCAM TM-90BM boundary microphones.

“We set up the DR-701D on a tripod with all four mic inputs connected,” recalls Carsey, who has played keyboards and guitar on five of her own albums since 2011 and regularly performs live with her band The Awe. “The TASCAM mics were ideal for this project because their flat bottoms let us tape them directly to the piano and get great sound without worrying too much about placement. We put one on the underside of the lid, one underneath the piano, one literally in a bush, and another even further away to see what other sounds of nature we could record.” 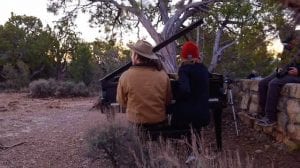 The onboard mixing capabilities of the DR-701D saved time in post-production, Carsey explains. “The field recorder can automatically make a stereo mix for you, using all the incoming audio, or you can record four tracks separately and mix them yourself later. It can also do both things at the same time: four tracks and a stereo mix alongside.”

The DR-701D boasts a slew of features for on-location production sound, including time code sync, audio over HDMI, and the ability to control and monitor multiple units from a master unit. Decoding for mid-side microphones is onboard, and as of firmware version 2.00, the DR-701D supports the Ambisonics standard for “virtual reality” recording using a single surround microphone. It can even commence recording when the video-record button on a connected camera is pressed, saving the videographer a step and making for tighter audio-visual sync. The DR-701D can meet the needs of the most demanding film crew but what most impressed Carsey was that she didn’t have to be on such a crew to get great results right out of the box. 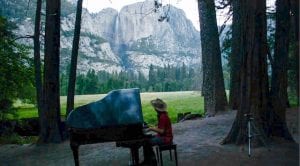 “The piano project was my first time doing field audio recording,” she points out. “The TASCAM gear was all very easy to use, and it gave me confidence that I could capture what I wanted of the performance and that the end product would sound professional. We definitely plan to use the DR-701D recorder and TM-90BM mics again on our next outdoor project, which will be in Death Valley, as well as on my work as a singer-songwriter. I would recommend this gear to anyone who’s an artist first but needs to do a lot of their own production.” To learn more about Brenda Carsey, visit www.brendacarseyart.com.