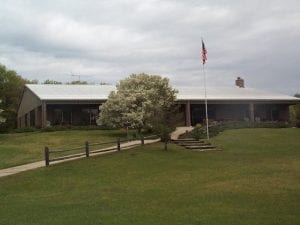 Westfield, WI—March 2019… Should your travels take you to central Wisconsin, about 70 miles north of Madison, you will be in the general vicinity of a little piece of heaven known as Camp Fairwood. For 52 years, Camp Fairwood’s 230 acres of pristine pine forest, prairie fields, and private fishing lake have hosted a year-round ministry, including 7 weeks of summer camp for Christian youth and families and about 38 retreats throughout the year.

Camp Fairwood’s 175-seat dining hall, built in the late 1980s, is its most often-used building, doubling as a general meeting space during the cold months. Family-owned AV systems integrators Sound Specialty designed and installed the original 1980s-vintage sound system in the dining hall. In recent years the aging system had started to fail, so Sound Specialty returned to Camp Fairwood to design and install a modern AES67 networked system with Attero Tech networked audio wall plates.

“Camp Fairwood is part of my dad’s church, and I went there a few times when I was in middle school,” explains Sound Specialty owner Jeff Saunders. “They’ve got a great, unique ministry, and we were glad to be able to help out. We donated the new system, and Attero Tech helped by donating their audio wall plates. We discovered Attero Tech two or three years ago when we were doing research about Dante, and we’ve done three or four previous installs with Attero Tech products. Their AES67 wall plates work well with the Q-SYS Core processor we’re using for Camp Fairwood, so they were an obvious choice.”

The dining hall has a shotgun-type layout, with an LED video screen and a carpeted platform on the south wall, which is the focal point for meetings and performances. On this wall, Saunders installed two Attero Tech wall plates: one unA6IO and one unAX4I. The unA6IO AES67 audio interface provides two balanced mic/line XLR inputs, two RCA line level inputs, and a 3.5 mm line-level input. Two balanced outputs are on side-panel depluggable connectors. The wall plate is PoE enabled, so power, control, and audio data are all provided by one CAT5e or CAT6 cable. The unAX4I offers four balanced mic/line XLR inputs, with two balanced line outputs on a Phoenix connector. All inputs and outputs can be used simultaneously, and all audio channels are available separately It, too, is PoE enabled. 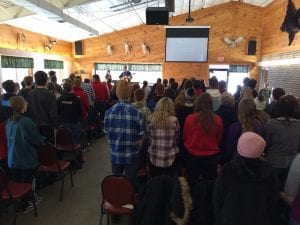 “When it’s not summer camp season, churches and schools and other organizations come in and use the dining hall for meetings, and they use the main speaker system for speakers and PowerPoint presentations,” Saunders notes. “They also have live music sometimes, and they can plug microphones and instruments into the Attero Tech wall plates for that.”

Camp Fairwood’s kitchen, on the east side of the building, is renowned for delicious and healthy food. Saunders installed an Attero Tech unA6IO-BT wall plate just outside the kitchen, which provides Bluetooth wireless audio input, as well as two RCA line-level inputs, a 3.5 mm line input, and a front-panel 3.5 mm TRS line-level output. “Attero Tech’s Bluetooth implementation is very user friendly and has a lot of range,” notes Saunders. “You can choose to have the system forget your Bluetooth device when you leave, which is good for some public situations, but for Camp Fairwood the Bluetooth is mostly used by the staff to play music during mealtimes from a phone or tablet, so we allow devices to automatically re-pair each time.”

The three Attero Tech AES67 interfaces connect to a QSC Q-SYS Core 110f processor, which manages the network. The processor sends audio to Crown K1 and K2 power amps, which drive two separate speaker systems. “One system has three Danley OS12CX loudspeakers and is used for overhead paging,” Saunders relates. “They also pipe in background music to those speakers during meals using the unA6IO-BT Bluetooth input. The main system uses one Danley SM100 full-range two-way loudspeaker firing from the south end, where the platform is located.”

The camp staff controls the system using an iPad with a custom GUI. Sound Specialty set volume limitations for safety and EQ’d the system for the room, which has a lot of hard surfaces, including a concrete floor. “But with one speaker, the acoustics aren’t too bad, and the ceiling insulation helps some,” avers Saunders.

Saunders is very pleased with the Camp Fairwood system’s performance and with his experience with Attero Tech. “Attero Tech offers a simple, robust solution that has been very reliable,” he confirms. “We haven’t had any failures. Their tech support has been great, and I have been very happy with their communications. I’ve suggested possible additions to the product line, and they were receptive and open. We’re very satisfied customers.”