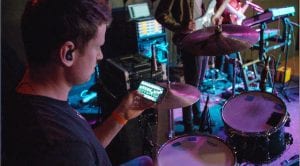 Seattle, WA—August 2018… Car Seat Headrest began in 2010 as singer/songwriter/multi-instrumentalist Will Toledo’s solo project and has developed into a four-piece indie rock band with a passionate following. Touring the USA, Canada, and parts of Europe, Toledo and bandmates Ethan Ives (guitar/keys), Seth Dalby (bass), Andy Katz (drums), and engineer John McRae have dealt with a wide variety of stage monitor systems. “Monitors were always a crapshoot,” admits McRae, who mixes front-of-house and monitors and handles tour management. “We were at the mercy of what the house could provide. Sometimes it was fine, sometimes it was not great but doable, and sometimes it was a total train wreck.”

The band no longer suffers with these issues since they got their Mackie DL32R rack-mount digital mixer and Mackie MP-series in-ear monitors. “I knew from the get-go that this band could really benefit from in-ear monitors,” McRae asserts. “They have a fairly loud stage volume, combined with a lead singer who gets fairly quiet sometimes. Now we’re using the Mackie MP-220 and MP-240 professional in-ear monitors, which have a lot of isolation and really good sound quality.”

The Mackie MP series includes the MP-120, with one dynamic driver per in-ear; the MP-220, with two dynamic drivers; and the top-of-the-line MP-240, which features a hybrid design with one dynamic driver and one balanced armature driver. The balanced armature is a unique ultra-compact driver that is incredibly efficient, especially with mid to high frequencies. This hybrid design provides punchy, accurate bass, with beautiful mids and highs. And with up to 40 dB SPL of sound isolation, it’s easy to hear every detail of a mix. “Back when we used stage monitors, it was a wall of sound in my left ear,” reports Katz. “The Mackie in-ears are a lot nicer for us.” 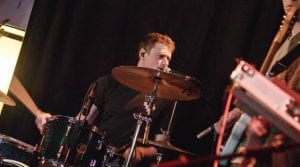 Between the Mackie DL32R rack-mount digital mixer and the MP-series in-ears, Car Seat Headrest has a fully self-contained monitor rig. “In a typical venue you might have a monitor console and a front-of-house console,” McRae reflects. “We bring a monitor mixer but it fits in a three-space rack. Pretty much any show or festival, we can show up, and I just have to set up a few racks. I control it with an iPad. Each person has the Mackie Master Fader control app on their iPhone, and you can set it up so that they can only change their mix; they can’t make a mistake and change somebody else’s mix.”

“I can do everything with Master Fader,” lauds Katz. “I can pan guitar stage right, I can pan bass stage left, I can have vocals dead center, and I can hear everything perfectly. I can turn it up, turn it down. It’s pretty great.”

From his iPad, McRae has wireless master control over all of the mixes. “My main job is front-of-house engineer,” he notes, “so more often than not I’m 80 feet away, with 500 people between me and the stage. It’s not easy to run down there and make a quick change. With the DL32R, I don’t have to be onstage to make changes. And it’s nice to not have to worry about whether the monitors are gonna suck; with the Mackie DL32R mixer and MP-series in-ears, our monitors always sound great. The band can hear things that have historically been hard for them to hear. Monitors are not a problem anymore.”