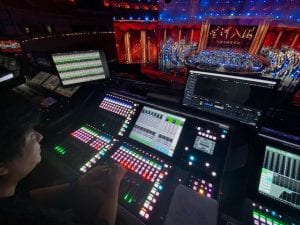 Jinan, China – October 2020… When China’s Jinan Olympic Center Donghe Stadium opened its doors to the public on September 16, the Ministry of Culture and Tourism and the Shandong Provincial People’s Government co-sponsored a remarkable symphonic presentation, treating the audience of 2000 to the region’s first immersive orchestral performance. The “Yellow River Flowing Into the Sea” concert featured an orchestra of nearly 160 pieces, as well as an 800-person chorus and guest appearances by nearly a dozen famous singers. The massive event utilized the power of Flux:: Immersive Spat Revolution to bring the audience inside the music.

FOH engineer Yong Xu mixed the show on an SSL L500 with L100 sidecar, integrated with dual Spat Revolution workstations running dedicated 8-core i9 computers, while OB engineer Wenzhao Ma ran a DiGiCo SD7 Quantum, also using dual Spat Revolution system. MADI connectivity via MGB devices ensured full redundancy. “We used Spat on both the live and OB production,” reports systems engineer Wenzhao Ma. “We divided the orchestra into 15 stereo stems and one mono stem to the FOH desk, and then flowed it into Spat using MADI. For the OB mix, I tried to put all the inputs into Spat, including functional channels like background music, ambient and audience mics. I did not use reverb tails on those elements, but but I used the acoustic simulation in Spat’s room effect to leave a little bit of early reflections, to give a sense of space.”

The object-based FOH mix consisted of more than 20 stems from the SSL console, with Spat Revolution rendering the mix to the LCR system to provide imaging and acoustic simulation. At the OB position, a mix of 21 stereo stems and two mono stems from the DiGiCo console utilized Spat to render stereo, 5.1 surround, and full binaural synthesis mixes. 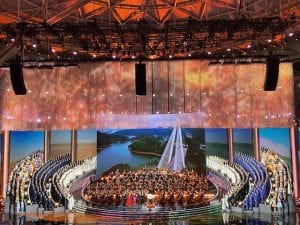 For Wenzhao, the show was his first experience working with Spat, and he was more than impressed. “The functions are powerful, and the sound is amazing,” he enthuses. “I really like the flexibility to be able to work in any configuration, even on headphones. Immersive and spatial audio is more than just a technical ‘trick’ – it enables us to improve and enhance the sound and the performance by adding dimension. Spat gives me the flexibility to show the composers what surprises are possible with their creations.”

As Wenzhao explains, the stadium required a fair amount of preparation for the event. “The Jinan Donghe Stadium is a normal sporting venue, not really designed for music events. We had to build a stage and create special rigs to hang the LCR loudspeaker system from a wire.” Each column comprised six d&b Audiotechnik GLS8 and two GSL12 boxes. Twelve SL-SUBs were stacked in front of the stage. “We really wanted to hang the subs as well, to avoid too much low-frequency build-up in the front rows, but the weight restrictions prevented us from doing that,” adds Wenzhao. Two groups of sidefills utilizing SE Audiotechnik M-F3a units were processed in mono.

The live recording of the event also added to the challenges, Wenzhao reports. “The event was being recorded for Blu-Ray, and the recording engineer Mr. Jakob Handel had specified using DPA4099 mics on the strings. We were a bit concerned about capturing a good sound on the strings, as the mics also picked up much of the sound of the brass. But then we found that using Spat to add some natural depth and dimension to the strings solved the problem perfectly; I didn’t even need to any EQ to the strings.” 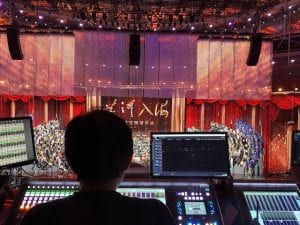 Wenzhao also gives high marks to the Flux:: Immersive team for their support. “I think I have read almost an entire e-book from Mr. Hugo Larin and the rest of the team,” he quips. “They really helped us a lot through a challenging setup.”

“One thing that I love about Spat is the ability to easily reconfigure the channel setup,” observes Wenzhao. “I will be presenting this recording to some of our clients, and I will be changing it to a 5.1 or 7 channel mix. With Spat, that is so easy to accomplish.”

“The show was a great success,” reports Wenzhao. “I will most certainly be using Spat Revolution for future projects. Our team had the first application of Spat in China, and it is just the beginning. We have a studio in Beijing, and we will create a Spat setup there. I have plans to use it for many upcoming projects.”