Crux Expands and Upgrades with Symetrix 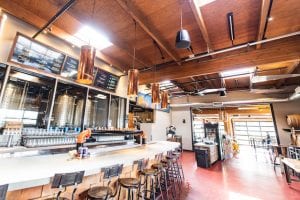 Bend, OR—May 2019… Nestled in the center of scenic Bend, with a beautiful view of the Cascade Mountains—complete with a “Sundowner Hour” centered around sunset every day—is the Crux Fermentation Project, a brewery and tasting room with an informal and welcoming vibe, a constantly changing menu of beers on tap, and great food. The tasting room in the center of the brewery, which is built inside an old auto-transmission plant, is doing booming business. Crux has recently expanded its drinking and dining experience, adding a new outdoor live concert space with a selection of food carts and an indoor fine dining area with a patio. To provide high-quality audio for the entire space, local contractor AudioVisual Bend designed and installed a new networked sound system centered around a Symetrix Jupiter 8 DSP and ARC-2e wall panels.

“Crux is a local place that’s very influential on the local scene,” explains AudioVisual Bend AV Designer/Project Manager Tony Sprando. “They did a big remodel and went from what was basically a bar with a brewery attached and just a few food items to a full outside concert area.” However, Crux was juggling two different audio systems, neither of them adequate: One was for mics and live acts and the other was designed for residential use. AV Bend replaced both old systems with a modern commercial-grade audio network with four zones. Outdoors, there’s a live venue space with a deck for larger bands. Indoors, the tasting room offers a louder and more celebratory musical environment, in contrast to the fine dining area and the entryway, where the music is kept quieter. The fourth zone is a corner of the dining area that is reserved for smaller one- or two-person musical acts. 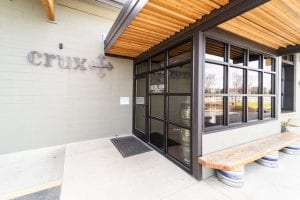 “The network allows audio broadcasting in any direction,” observes Sprando. “If we have a little one-person act inside, we can broadcast that outside, and if we have a band outside playing the concert space, we can broadcast that indoors as well. We installed an all-weather patch panel on the outdoor deck; bands just flip up the cover, plug in, and they’re ready to go.” The system outputs to Lab.gruppen amplifiers and weather-rated, pole-mounted QSC speakers for the outdoor venue. JBL CRV speakers, mounted horizontally, cover the patio, while additional CRVs in vertical arrays cover most of the indoor area. JBL Control-series pendant speakers handle the tasting room and entryway. “They have digital signage with menus and more that’s all tied into this,” Sprando adds.

One major reason Sprando and the AV Bend team favor Symetrix is that the processors are easy to program, and the controllers are user-friendly. “Symetrix processors don’t require a lot of hoops to jump through in order to log in and get moving,” Sprando confirms. “User error goes way down; we greatly reduce service calls. And the customers love the Symetrix ARC-2e wall panel; with only three buttons, we market it based on how easy it is to use. The Jupiter 8 also supports Symetrix ARC-WEB for wireless remote control via smartphones and tablets, and Crux’s Pandora background music is now integrated smoothly with the mic and line inputs for easy control from one app.”

AudioVisual Bend does a lot of upgrades, often replacing outdated systems with up-to-date networks based on Symetrix processors. “A lot of the systems we replace are based on knobs and various connectivity devices that have to be manually operated to get audio to the zones,” Sprando relates. “You have to go back into the IT closet to make things work. We replace that with a Symetrix DSP, and you still have all of that control but it’s controlled from out in the listening environment with three buttons on an ARC wall plate or wirelessly from a phone or tablet, using ARC-WEB.” 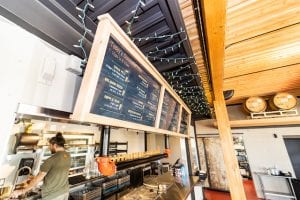 Sprando notes that both customer and contractor benefit from the ability to service the system remotely. “The Jupiter 8 rack is never touched once we’re done,” he details. ”It’s mounted, you lock the door, and there’s no need to go in for day-to-day use. If we have to service these systems, the turnaround time is second to none, thanks to the Symetrix remote-access capability. You just get a laptop and plug it into the switch, and we remote in and make the changes. We can go in and not only turn levels up and down but work with EQ and compression to really dial in our sound for each zone. The flexibility is great, and so is the sound quality.”

“We’ve been using Symetrix processors for six years or more,” Sprando concludes. “The day of the line/mic mixer with knobs in a rack is really over.”