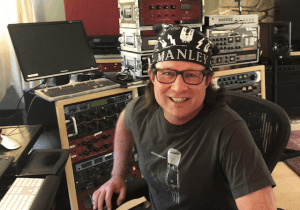 Los Angeles, CA – May 2018… Most engineers can only dream of working with the same client for decades—let alone a client who’s one of the jazz world’s brightest stars. But Erik Zobler is not most engineers.

The two-time Grammy winner was George Duke’s studio engineer for 34 years, recording 19 albums with him, from 1979’s Master of the Game until 2013’s DreamWeaver, released just before Duke passed away. And that’s just one line on Zobler’s resume.

His A-list recording credits include albums by Whitney Houston, Miles Davis, Anita Baker, and Michael Jackson, plus film and television projects such as The Bourne Supremacy and Happy Feet. Over the years he’s occasionally worked in live sound, and in 2005 he joined Duke on the road to mix front of house. He is also a producer and a mastering engineer.

Today, this Renaissance man works mostly out of his Los Angeles home studio, where he divides his time between mixing and mastering. Recent projects include mixing front of house for two Kenny Loggins tours, recording Romanian X-factor stars and musicians, mixing music for the 2018 film The Little Mermaid, and mixing a new funk/jazz album for Byron Milller. He is also developing new artists.

His studio workflow spans analog and digital domains, and he likes to choose components for the signature sound they add to his process: “Every piece of equipment leaves a footprint on the audio, just like picking a paint color.”

Zobler has been using Manley gear for decades. After doing a sax session with Everette Harp, he decided to buy the stereo Pultec EQP-1A, Manley’s modern interpretation of the legendary Pultec Equalizer originally produced by Pulse Technologies.

“Soprano sax can be difficult to get a good sound on,” he explains. “I had been trying different things at the studio, with marginal results. When I put the Manley Pultec on his sax, it was an instant winner. By the end of the session I said, ‘I love it so much that I am buying one of these.’”

“A few years later, while working at George Duke’s studio, I told him we needed a high-quality mastering EQ.,” Zobler continues. “He asked me which one I wanted. “I told him, ‘Massive Passive Stereo EQ.’ I showed up at the studio the next day, and there it was.” That Massive Passive became an integral part of his recording chain, which generally centered around tube components: “I would go through a mic pre, a Massive Passive, then a limiter, to tape or converter,” he says. “I did a ton of overdubs and vocals that way; it was a big part of my tool belt. When I was working with George, I used it almost every day.”

“Manley stuff has always been vibey and tubey,” Zobler continues. “It smooths things out. I hesitate to use the word ‘warm,’ because you could add a hundred-twenty Hertz to something and someone can call that warm. But, there are other characteristics that have to do with overtones and how they shape transients, that kind of thing. Manley equipment has always treated those harmonics and transients in a nice, friendly way that puts a smile on your face when you plug it in.”

Long ago, Zobler made it his mantra to never let technology get in the way of capturing an emotional performance. And that means knowing how his tools will perform long before he hits Record. “If I know that a Manley piece of gear, or any other piece of gear is going to work for any situation, then I’m already ahead of the game, and I can concentrate on capturing the moment,” he says. “If you want it super distorted, or you want it super clean, everything in between, whatever your goal is, if you can accomplish that while getting a great performance, you’re the best of both worlds. And that’s what I call my Holy Grail of perfection.”