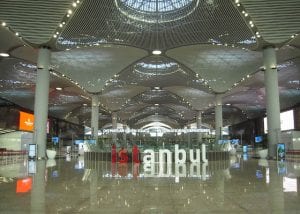 Istanbul, Turkey—May 2019… On April 6, 2019, a stunning airport that is planned to become the world’s largest opened its more than 15 million square feet (1.4 million square meters) of floor space on the outskirts of Turkey’s most populous city. In an amazing 41 hour operation, Turkish Airlines moved 44 tons of equipment from the old Ataturk Airport to the brand new,$11 billion Istanbul Airport, which is can currently accommodate 90 million passengers annually and will eventually handle up to 200 million when complete. The new airport features the latest technology at every turn, with biometric screening, advanced passport control, smart kiosks with augmented reality, and green construction and operations throughout. Its Airfield Ground Lighting System is the largest in the world.

To ensure clear, intelligible announcements and emergency alarms——no small challenge in its vast spaces replete with windows and other hard surfaces—Istanbul Airport contracted with systems integration firm Titan (www.titanbt.com) to install a state-of-the-art sound system. In search of line arrays that could meet the challenge, Titan consulted with AtlasIED (www.atlasied.com), which supplied much of the equipment for the audio network. “AtlasIED asked us if we would consider working with Renkus-Heinz and that they would provide us with full design support throughout the project,” recalls Titan CEO Bulent Akinci. “That was essential because most of the other brands had a lack of support in design.”

“The check-in area presented a considerable challenge because it’s so big, so complex, and the ceiling is so high,” Castro relates. “The baggage reclaim area is also a very important space and was a challenge because it’s big, yet the ceiling is low. It required very tight beams for the sound to reach all of the people. Furthermore, in each pier there was the issue of perfectly delaying and synchronizing all of the Renkus-Heinz arrays. This is a considerable problem when we’re talking about a distance of over 800 meters across a single pier.”

To accomplish this—to the extent a solution was possible—Castro used the ICONYX’ precision beam-steering to divide the large zones into small “virtual” areas that are acoustically independent. “‘We then assumed points at each new small area as the zero reference and starting point for synchronizing all of the next zones,” he recalls.

For the main check-in area, Castro specified 16 Renkus-Heinz ICONYX IC32-24-RD digitally steerable line arrays, aiming the beams along the check-in desks, toward the main wall of the passenger entry area, and away from the reflective check-in counters. Sixteen IC16-8_RD steerable arrays extend coverage to the main entrances. Another 26 IC8-RD columns installed on the top of the counters, or positioned behind the main IC32-24-RD arrays, fill in the remaining areas. 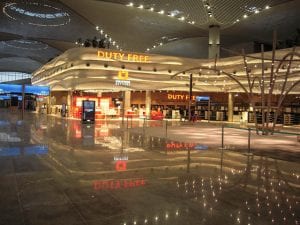 The baggage claim area is served by 16 IC32-24-RD arrays mounted at regular intervals and directed toward the conveyor belts. Nineteen IC24-16-RDs cover the greeting area up to the exit door columns for the arrival area.

Each of the five piers that bring passengers to the gates is equipped with 30 Renkus-Heinz IC16-8-RD line arrays. The IC 16-8-RDs are installed in two parallel lines, aimed in the same direction, at regular intervals along the piers’ 800-meter-long (875 yard) walkways.

“This was the first time we had done a big project using Renkus-Heinz,” observes Akinci. “For us, this is probably also the largest line array application we’ve completed in general. The beam-steering technology is definitely a must-have for this type of building. It ensures that whether you’re right by the speaker or 80 meters away, the sound pressure level is the same. And because the beams are steerable, you only have to project the sound to where you need it. With less reflections, you are populating less air molecules, and so the result is less reverberation.”

The sound system uses a dedicated Dante network that runs over the airport’s central LAN but is separate from the overall airport network. Using Dante on a system this large presented additional challenges. “Originally, without knowing at the time, we’d thought we’d done the right thing by splitting the network and system design up into seven sections,” Akinci muses. “But we later learnt that there were limitations in terms of how many nodes you could have per Dante controller.”

Complexity and technical challenges, continuing expansion, and ongoing fine tuning notwithstanding, the sound system, like Istanbul Airport, is now operational—and successful. “There were a lot of design changes, but nothing so radical that it really threw a spanner in the works,” reports Akinci. “I think our design is quite solid. There’s absolutely no doubt that it was the right decision to go with Renkus-Heinz. However, the product itself is very important, but even more important is the people that you’re dealing with. Norbert Bau, Ricardo Castro, and the other people supporting us on the Renkus-Heinz part of this project really made it a success.”

For more on this project, see the May-June 2019 issue of ProAVL MEA.