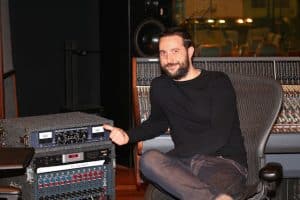 Chino, CA – April 2015… If you’ve seen such movies as Ruby Sparks and The Mechanic or TV shows like Once Upon a Time, Beauty and the Beast, and Crash, you’ve enjoyed Jason LaRocca’s music recording and score mixing mastery. You also enjoyed the sound of his Manley Variable MU® Stereo Limiter Compressor.
“I use the Variable MU all the time on all the TV shows, films, and records I work on,” enthuses LaRocca. “It just sounds great. I have the Mastering version with the High-Pass Side Chain mod and T-Bar mod. Most people use it for mixing and mastering, and I do that, too, but I use it even more to compress instruments on the way in during tracking.”
Committing to processing during tracking seems like an old-school approach. Today, it’s more common to track dry and process later. “True, it is old school,” responds LaRocca, “But I know what I want to hear, and the Variable MU is such a musical sounding box that I don’t need to wait. If you know what you’re going for, you can go ahead and compress on the way in. In fact, after compressing with the Variable MU, the tracks are recorded so well that they feel done before I mix in my DAW. They sound great. And when I do mix, I use the Variable MU on the 2-track.”
The Mastering Version of the Variable MU Limiter Compressor incorporates detented steps and expensive Greyhill rotary switches with gold contacts. The steps are determined with a large number of 1% precision metal film resistors. The ten-fold improvement in precision helps a great deal in left-right matching. There is a subtle audible improvement with stepped switches, as well.
The High Pass Side Chain mod comes stock on all regular and mastering Variable MU Limiter Compressors. It adds two switches to the front panel, one for each channel, so that when engaged, the side chain will not respond to frequencies lower than 100 Hz. (Other frequencies can be custom ordered.) This mod can be used on music with heavy bass lines or bass-heavy mixes where you don’t want the bass driving the whole action of the compressor.
The T-Bar mod uses a pair of 6BA6 pentode tubes, wired as single triodes, to replace the obsolete 6386 tubes in earlier Variable MU units or to convert later 5670-based units to have the smoother limiting characteristics of the original 6386.
LaRocca says that few pieces of gear these days really make a difference. “Plug-ins are really good now, and few things are worth spending a lot of money on,” he insists. “But the Manley Variable MU is always useful, and I always like what it does. It holds the mix together. In sound tracks and when recording orchestras, there isn’t a lot of room for color; you’re trying to capture the music in its purest state. But the Variable MU lets me add a bit of color in a musical way.”
What else is on LaRocca’s short list of gear that makes a difference? “The Manley Massive Passive is next on my list. I want several of them.”