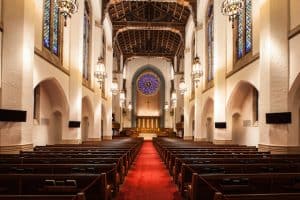 Greensboro, NC 2015 – April 2015…. Founded in 1824, First Presbyterian Church of Greensboro, North Carolina serves a congregation of over 2,700, with 3 pastors and a staff of 40. Its beautiful, historic sanctuary, built in 1928, seats 1,560 and features an organ with more than 6,800 pipes.
In 2012, the church embarked on a $15 million renovation to its sanctuary and an adjoining building, including a major upgrade to the sanctuary sound system. For the A/V upgrade, First Presbyterian called on systems integrator Audio & Light of Greeensboro  and system designer Curtis Kasefang of Theatre Consultants Collaborative, based in Chapel Hill, NC. The renovation took two years to complete; the first post-renovation service was held Sunday, December 21, 2014.
Designed in the Southern French Gothic style, the sanctuary is in the traditional form of a cross. It presents a 160-foot-long center aisle and an 85-foot ceiling with lots of angles, as well as dual lofts with pews, a rear balcony that is 33 feet above the floor, multiple alcoves, a pair of 64-foot-long transepts, and plenty of glass and hard surfaces. The choir sits in pews that are perpendicular between the pulpit and lectern areas. The room is stunning but the acoustics are complex.
Services are traditional (contemporary services with a worship band are offered in the adjacent building), and the extremely live acoustic environment works well for choir and organ music. But sermons and other speech have been hard to hear without a high-quality sound system.
“The previous system consisted of three horns, high up in the rafters,” notes Audio & Light Sales Engineer Brent Everhart. “One was aimed directly down to cover the front half of the room, one was aimed at the rear, and one was aimed at the balcony. It was typical of systems installed in the early ‘80s but it was not a good solution for spoken word, especially compared with modern arrays.” 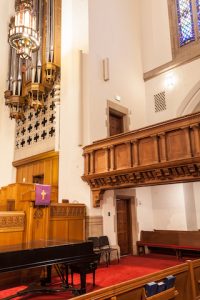 For the new system, TCC’s Kasefang chose the same Renkus-Heinz Iconyx-series digitally steerable column arrays that Everhart had previously recommended. The system starts with a pair of Renkus-Heinz IC32-R-II loudspeakers (featuring 32 4-inch coaxial transducers, each with three high-frequency tweeters) whose beams are configured to handle the main floor seating. A pair of IC16-R-II columns is configured to cover the back seats and rear balcony, while a second pair of IC16-R-IIs cover the altar area. Two IC8-R-IIs cover the lofts.
“The Iconyx loudspeakers’ ability to precisely steer beams of audio exactly where we needed it made all the difference,” says Everhart. “It enabled us to provide clear, highly intelligible sound, despite the complex acoustics of the space.” The loudspeakers are painted white, enabling them to unobtrusively blend into the walls.
Audio & Light faced significant logistical challenges when installing the system, as well. “Those walls are stucco over tile, and the concrete is six to eight inches deep inside the columns where the speakers are mounted,” Everhart explains. “We had to fabricate metal brackets that go deep into the concrete and then fill it in, after which a machinist drilled and tapped holes to mount the hinges for the speakers. The wiring is within conduit hidden in those tie lines. Fortunately, as part of the renovation, they had scaffolding, the chandeliers were taken down, and we had access to the roof.”
The results were well worth the effort. “The client is extremely pleased with the sound system,” says Everhart. “Now the congregation worships in a gorgeous sanctuary with sound quality to match.”