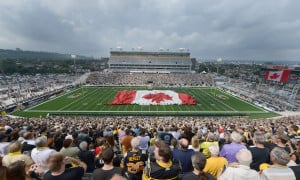 Hamilton, Ontario – March 2015… When the Ontario region surrounding Toronto – often called the Golden Horseshoe – was named as host of the 2015 Pan American Games, the entire region began preparations. To host soccer games, a new facility, Tim Hortons Field, was erected in the city of Hamilton. The multi-purpose facility sits on the former site of the venerable Ivor Wynne Stadium, home to city’s Canadian Football League franchise, the Tiger-Cats.
One big challenge in the project was creating a sound system to meet the exacting standards of both FIFA (soccer’s governing body) and the CFL, while controlling sound from spilling into the nearby residential area. To minimize the number of loudspeakers while still meeting these requirements, a sound system based on Fulcrum Acoustic’s TQ Install weather-resistant loudspeakers was proposed. The main system designer was Dave Clark Consulting, along with another consultant, Arthur Skudra. The system was installed by A/V Solutions of Mississauga, Ontario.
“The challenge was pattern control,” explains consultant David Clark. “FIFA requires a very loud system so it can be used for crowd control and urgent public address, yet we needed to avoid the nearby homes. With no roof structure, all of the sound has to come from above and behind. Fulcrum makes some products with substantial directivity control that suit the project perfectly. We used EASE to demonstrate performance both in the stands and at the perimeter of the property.” 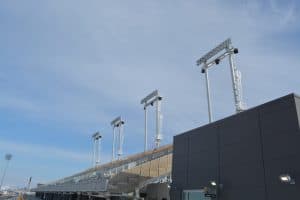 The system was based around the Fulcrum Acoustic AH463, a dual-loaded 4-inch compression driver coaxially mounted in quad 10-inch LF horns.. Twelve of these biamplified boxes are mounted, with three on each of the four lighting towers atop the east side stands. Four more are installed above the upper press box area on the west side – roughly seven stories above the field. These long throws down into the bowl provide the primary audio output for the stadium.
As Fulcrum Acoustic co-founder Dave Gunness explains, the AH463 is a brand new product created especially for this project. “After reviewing the project’s SPL requirements, along with the mounting locations for the loudspeakers, it was clear we needed a higher-output solution than what was currently available. The AH family already offers high sensitivity, high power handling, excellent pattern control, and a compact footprint, so it made sense for us to create a higher-output version with a tighter dispersion pattern for this project.”
Seating areas shadowed by the stadium’s architecture are then covered by strategically chosen fill speakers, time aligned with the main system. Full-range Fulcrum coaxial horn systems were specified based on directional requirements, including 16 AH65FP (60×45-degree dispersion) and four AH96FP (90×60-degree). Both systems boast Fulcrum’s Full Passive design, delivering an unprecedented size-to-output ratio with fewer amplifier channel requirements.
Covering the middle deck of the west side seating are 16 Fulcrum CX1295 speakers, a smaller full-range model installed on cantilevered yokes. “This allows them to essentially cover two levels, eliminating an entire row of speakers on the west side,” explains Clark. 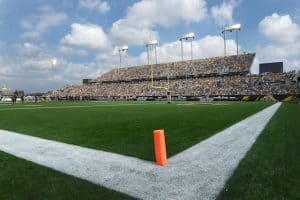 Clark praises the AH463 speakers’ pattern control and intelligibility. “It was very well behaved and delivered a very focused, even coverage, as well as satisfying the requirement of getting very loud for urgent public address,” he observes. “The Fulcrum system can achieve those levels in a reasonably small form factor, which was also important because of potential shadow interference with lighting. It was a very good product fit for this project.”
Clark was also impressed with Fulcrum’s high level of involvement in the design process, especially with the AH463 being a new product. “They measured the speakers in the lab and provided custom GLL files that I could plug into the EASE model,” he notes. “That was a real plus. When the speakers arrived, they were accompanied by preconfigured crossover objects, including FIR filters, for the amplification and control system, which is a 64-channel Q-Sys core by QSC.”
Dave Gunness agrees. “Dave Clark came to us with a very solid, well-designed concept for this venue. That really enabled us to fine-tune the system to achieve optimal performance.”
The stadium’s sound system was commissioned in early August, when Dave Gunness came to Hamilton, working with Dave Clark, Arthur Skudra, Jim Vanderweil, and the A/V Solutions team to ensure that the deployment of the system measured up to the predictive computer models. Garry Brown, veteran stadium sound engineer for the Hamilton Tiger-Cats, was also in attendance.
“The Fulcrum system sounds so much better than the old stadium, and it’s nicely controlled,” reports Brown. “They spent a day and a half checking filters and coverage, making sure everything was smooth and even. It’s much better for the houses right across the street behind the end zone, too.”
Consultant David Clark feels confident the weather-resistant Fulcrum Acoustic speakers were the right choice for this important venue. “Once the speakers were turned on and the Q-Sys program was loaded, the speakers came on and sounded great,” he recounts. “Everything worked according to plan, and there was very little adjustment to do. The stadium sounds great.”
After multiple construction delays, Tim Hortons Field finally opened to the public on September 1st for a Labour Day CFL game. The hometown Hamilton Tiger-Cats defeated the rival Toronto Argonauts, 13-12, with the new, modern stadium being well received by local fans and press.
(Photos courtesy Hamilton Spectator)