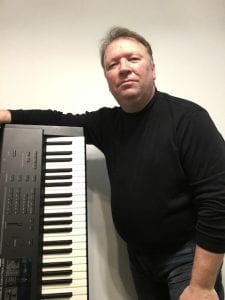 Fort Wayne, IN—January 2019… Jeff Gastineau’s most important audiences are not quaffing beers or buying t-shirts at the merch table. In fact, at many of his gigs, Gastineau more or less is the merch table. As a product specialist for InMusic Brands, Gastineau is often called on to demonstrate equipment from the company’s stable of 16 music and audio technology brands, including Akai, Headrush, Alesis, and M-​Audio. To give a smooth demonstration, Gastineau needs a system that is stable and in which he can work fluidly. Gastineau relies on Deskew Technologies’ Gig Performer software for this and more.

Drawing on decades of studio experience and live gigs in and around Columbus, Ohio, Gastineau’s demos typically take place in front of industry professionals deciding what to buy. He needs to show key features in a coherent context but with the flexibility to deviate from his “script” and improvise when needed.

Earlier, Gastineau struggled to get the performance he needed from another well-known software plug-in host. “It’s always been the CPU hit that was the problem,” he complains. “I would get a system set up the way I wanted, and then, at some point, the program would max out and start creating dropouts in the audio.“

Gig Performer changed everything; Gastineau marvels at the difference. “Gig Performer’s CPU usage is not just slightly better, it’s infinitely better, which is amazing in itself. I’m not just getting a 10 percent improvement in performance, I may be getting closer to 75 percent better performance. It seems crazy.” 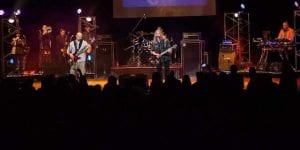 Gastineau found learning Gig Performer easy. “I’ve worked with Cycling 74’s Max/MSP platform, and Gig Performer’s intuitive use of object icons and dragging to cable things together was similar to Max’s. I’ve been around the industry long enough that I’m used to working with physical cables, so working with virtual cables is not bad for me.”

At the 2018 NAMM show, Gastineau demonstrated the Alesis Vortex Wireless 2 keytar MIDI controller. “My demonstrations are often like a mini-clinic,” Gastineau explains. “I typically have a backing track that I play on top of, and Gig Performer’s Audio File Player is great for that. I had control of the backing track level from the Vortex controller and mixed everything in Gig Performer.”

Gastineau’s demos at Sweetwater Music’s GearFest involve considerably more production. “GearFest is a two-day event where we perform a mini-set every couple of hours,” he describes. “It’s a full band setup, so I’m playing what I’d use for keyboards on a live gig with a four-piece band: pianos and organs and lead sounds for trading with the guitar player. I have an M-Audio Hammer 88, which is a bare-bones, 88-key weighted keyboard, and an Akai MPK61 61-note keyboard, which has a bank of eight each switches, knobs, and faders. I did a live mix using the faders for level control and the switches to disable MIDI for any part. 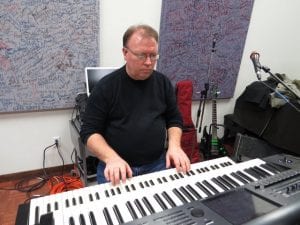 “I needed to be able to ‘wing it’ on the fly, so I set up palettes of eight sounds, each in its own rackspace (a complete Gig Performer configuration of plug-ins) and was able to quickly grab any of them, rather than setting up a rackspace for each song. The Gig Performer edit screen gets a little messy on a MacBook, but once you turn the display around to the rack panels, it looks pretty clean.”

With his success using Gig Performer at NAMM and GearFest, Gastineau is ready to dive deeper and make more use of his new system. He is only waiting for the right situation to put Gig Performer’s GP Script language to work. “I’m pretty geeky about that stuff, so I’ll find something I want to do that needs it.”

In the end, Gastineau’s attraction to Gig Performer comes down largely to two main attributes. First, says Gastineau, it can handle the changing demands of new demos and shows. “It’s got flexibility, so you’re not tied down to one way of working, and I can take it as far as I want.” Second, it is reliable—any performer’s top priority. “I haven’t found problems with it,” he reports. “It has worked for what I wanted to do.”