Gig Performer Covers All the Bases for Darryl Hebert 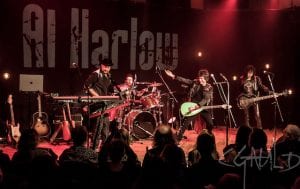 Vancouver, British Columbia, Canada—April 2019… Darryl Hebert gets around a lot, receiving calls to play in a wide variety of contexts. Sometimes he occupies the keyboard chair for Canadian greats like Stonebolt or Al Harlow of Prism; other times he performs at casinos with cover band The Rhythm Method or plays original music with the Matlen Starsley Band. Hebert’s studio is filled with keyboards dating from 1955 forward but the only way he can keep up with the range of sounds he needs is to utilize lots of virtual instruments running in Deskew Technologies’ Gig Performer plug-in host.

Hebert has only been performing with a laptop for about half a year. “I was looking for a piece of software that was more for performing than recording, and Gig Performer is the perfect fit,” Hebert notes. “Gig Performer is for performers like me who play everything live. It’s really expedient for setting up splits and really flexible in its routing.”

Gig Performer has also shrunk Hebert’s setup, making it easier to haul around to performances. “My go-to rig used to be a Korg Kronos plus a Nord Stage 3 Compact for organ,” recalls Hebert. “A two-keyboard setup, the standard kind of thing. But now, with Gig Performer, I can take a Nord Stage 3 HP or 3 Compact which are about 25 pounds, plus one lightweight stand, and put that up along with a laptop, which is about 3 pounds. The rest of my keyboard gear is eliminated.” Hebert runs Gig Performer on a Microsoft Surface Book 2 with 1 TB SSD and 16 GB RAM and carries a similarly appointed Dell laptop with a duplicate Gig Performer setup for backup.

Hebert runs a sizable array of virtual instruments in Gig Performer, including Spectrasonics Omnisphere, Native Instruments Kontakt (to use the norCtrack Studio Korg Kronos instrument, among other things), Arturia Farfisa V and Clavinet V, Modartt Pianoteq, UVI Workstation running the Acousticsamples B5 Organ, GG Audio Blue3, Native Instruments Komplete (for strings, horns, etc.), AAS Lounge Lizard, Spectrasonics Keyscape, Arturia Jupiter 8V, and the Waves Gold bundle for processors. Other plug-in hosts might fold up under such a heavy load, but Hebert reports that Gig Performer doesn’t even blink at the demands. “Gig Performer is really CPU efficient, which is great because sometimes I have 12 or more plug-ins running at the same time,” he says. “My setup is really CPU intensive, but I don’t think I’ve ever seen the CPU usage meter go over 40 percent. I have had no CPU or stability issues with Gig Performer. None.” 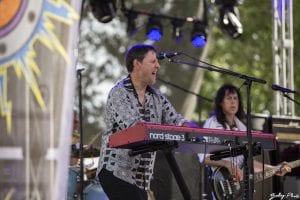 Hebert builds a Gig Performer Gig document for each band he works with. “I use one rackspace per song, but I might use 15 plug-ins to make a single keyboard layout,” he explains. “If I’m doing a really synth-heavy project, the whole Gig Performer screen will be filled with VI modules.”

Hebert creates tremendous numbers of split points to put many VIs on the keyboard at once but Gig Performer’s flexibility lets him accommodate even extreme situations. “I just joined a Bryan Adams tribute band in which I play Adams’ song “(Everything I Do) I Do It for You,” the theme from the 1991 film Robin Hood: Prince of Thieves,” Hebert discloses. “In that song, I use too many splits for one keyboard layout, including assigning multiple pitches to a single physical keyboard key, yet I still use just one rackspace and a single keyboard. I set up a switch in Gig Performer’s Rig Manager so that when I press a button on my Nord, Gig Performer toggles one plug-in off and turns on another with a different sound.”

Hebert doesn’t need the real-time control provided by the program’s widgets, which map physical controls to plug-in parameters, but he employs the text features heavily. “I have a three-space panel that is just for text notes. I play in a lot of different musical situations. It’s good to have notes in front of me, and the text box works really well for that.”

Hebert’s emphasis on performing every part creates profound resource demands, and he is emphatic that only Gig Performer meets them head on. “DAWs are fine if you have lots of recorded tracks you need to click on and play,” he acknowledges, “but I’d rather play completely live than play with tracks. For all-out playing with splits and widgets, if you need them, there’s nothing that compares to Gig Performer. I can’t imagine using anything else.”