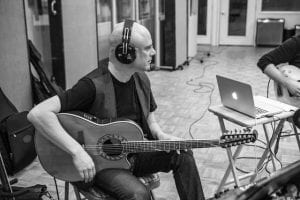 New York, NY — September 2018… Composer, guitarist, theatrical sound designer, producer, teacher, and mixer Tony Geballe is clearly as versatile as he is accomplished. A long-time instructor at Robert Fripp’s legendary Guitar Craft workshops, Geballe has spent years working closely with musicians from King Crimson and Peter Gabriel’s bands, and performed in settings ranging from solo acoustic 12-string guitar to “progressive darkwave” with the band Braindance. Most of his performing now is with Zero Times Everything, a trio consisting of Geballe and two other Guitar Craft alumni.

ZXE (as the band’s name is abbreviated) merges ambient sounds with progressive rock and other influences to create cinematic compositions. Geballe leverages a variety of processor and synthesizer plugins to generate a broad sonic palette for ZXE, and needs extensive control of the entire setup at his fingertips—or, more accurately, at his feet. Making it all work requires plenty of footpedals and switches in performance, and considerable time spent configuring his setup in advance. Geballe centers the whole system on Deskew Technologies’ Gig Performer software.

Geballe finds Gig Performer, running on a MacBook Pro laptop, more powerful and versatile than other systems he’s tried, “Gig Performer gives me access to all of the amazing amp simulations and speaker cabinet simulations I have, as well as all of my effects plugins,” he explains. “I can create, and instantly call up astonishingly great guitar sounds, as well as synth sounds.”

Even sophisticated programming is a snap. “My pedals produce values from 0 to 127, like anybody else’s, but I can easily specify in Gig Performer how much of that range to use for each pedal in a rackspace,” details Geballe. 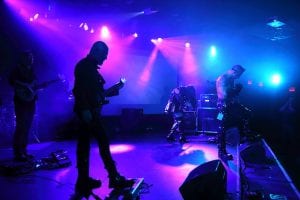 A Gig Performer “rackspace” is a complete configuration of controllers and their target plugins (whether processors or virtual instruments). One or more rackspaces can be stored in a single “gig” document. Geballe creates a rackspace for each composition, then compiles a gig document for each performance, with the setlist dictating which rackspaces are included and their order. “I can rearrange the rackspaces very quickly,” he says. “I like that flexibility.”

Geballe simply steps through the list of rackspaces in the gig document as he progresses through the performance, a process made even smoother by Gig Performer’s ability to create seamless transitions. “I can program the amount of time a sound takes to fade out when I switch rackspaces, so I don’t lose the tail end of effects. That’s something missing from other software I’ve used.”

Geballe supplies his Gig Performer rackspaces with both audio and MIDI output from his guitar. Jam Origin’s MIDI Guitar 2 polyphonic guitar-to-MIDI software generates the MIDI, which he sometimes applies to make virtual instruments double what he is playing on the guitar, and other times to trigger synth effects sounds. A Roland FC-300 MIDI foot controller enables Geballe to step through rackspaces, control volume and other parameters, and switch effects and VIs on and off.

Gig Performer’s Rig Manager helps him keeps all of the FC-300 pedals straight. “Using Rig Manager, I can name and control the MIDI output of each footpedal. I can just choose ‘Wah’ in the Rig Manager and it knows which pedal and MIDI channel to respond to.”

But Geballe saves his highest praise for Gig Performer’s stability, a top priority in live performance situations. “Gig Performer has been very, very reliable on gigs. I have had nothing even close to a show-stopping problem with it.” The show must go on, which, for Tony Geballe’s shows, means Gig Performer must go with him.