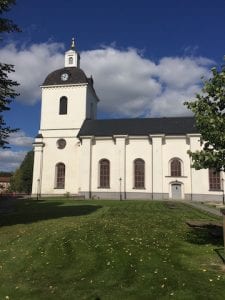 Säter, Sweden—September 2018… About 190 km (118 miles) northwest of Stockholm lies Säter, a lovely town of about 4,400 people that boasts one of Sweden’s best preserved wooden downtown areas. Here, you’ll find narrow streets lined with charming little shops. Nearby—everything is nearby in Säter—is Säter Church, originally built in 1637 and reconstructed in Neoclassical style between 1778 and 1779, although its tower was replaced in 1806-07 due to unstable soil.

As one would expect from a church of this type and vintage, Säter Church’s acoustics are challenging, and its old sound system failed to provide even coverage and clear sound. To provide a new system that delivered top quality sound and technology capable of meeting the building’s acoustical challenges, the church leaders reached out to respected system designer, installer, and contractor Robert Nilsson of DAT AB. Nilsson’s solution: Renkus-Heinz VARIA-series modular point-source line arrays and SA-series modular power amplifiers.

“The church had a reverb time of around five seconds, bad reflections, and bad sound for the choir, even without a PA,” recalls Nilsson. “The only thing that sounded fine was the organ.” In addition, aesthetics and respect for the historic structure were primary considerations. “We could not use acoustic treatment, place loudspeakers in new positions, install conduit, or bring in new furniture for the mixing desk,” Nilsson details. “And the budget was tight.”

The DAT AB team made an EASE model of the church and searched for a suitable loudspeaker solution. “We quickly discovered that the Renkus-Heinz VARIA system was the best system for our customer,” Nilsson reports. “We made several Focus calculations so we could see that even coverage and smooth response could be obtained within reasonable limits. The customer was excited that we could deliver this coverage using the existing loudspeaker placement.” 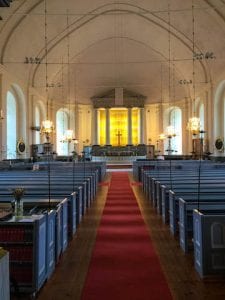 Renkus-Heinz VAX101 array modules employ one 10-inch low-frequency woofer and either one or two 1-inch, neodymium, high-frequency compression drivers, coupled with Renkus-Heinz’ unique Tuned Conic Diverter waveguide. The VAX101-7 offers two high-frequency drivers, while the VAX101-22 has one. Both are available in 60º, 90º, and 120º standard configurations, as well as with 60º/90º and 90/120º transitional wave-guide options, and are arrayable from 0° to 7.5° in 1.5° steps.

“With only three piece of 16 mm pipe through the roof, we could use all safety wire, with CAT6 cable for the Dante network and RHAON system control and 230V power,” Nilsson offers. “We installed a Dante-enabled Soundcraft Impact mixing desk, and thanks to our skilled employee, Björn Dahlström, we were able to reuse the old sound system furniture for the new mixer.”

Even with state-of-the-art amplification and loudspeakers, Nilsson and his team had their work cut out for them because of the acoustics. “During tuning and commissioning, using AFMG EASERA and SysTune audio measurement and analysis software, we finally got to the point where we could identify the frequencies of the reflections,” Nilsson recounts. “The system is smooth to work with and allows for custom presets, so we could test and tune it to respond as needed, depending on the activity of the church.”

The Säter Church upgrade project was a landmark of sorts. “This is the first Renkus-Heinz VARIA installation in Sweden using Dante,” notes Nilsson. “It worked so well that we’re searching for a new project where we can install another Dante-enabled Renkus-Heinz VARIA system.”