Hollywood, CA – March 2015… Universal Studios Hollywood’s hottest new attraction, Despicable Me Minion Mayhem, opened its doors in the summer of 2014. Based on Universal Studios and Illumination Entertainment’s 2010 animated film, Despicable Me, it’s an immersive 3D experience that includes motion, sights, and surround sound courtesy of Renkus-Heinz Iconyx IC2 digitally steered line array loudspeakers, and installed by AVI/SPL.
The exhibit is comprised of twin, back to back theaters, taking visitors on a hilarious, raucous journey with Gru, his daughters, and the mischievous minions. While waiting in the theater lobby, visitors are “trained” as actual Minions, with pre-show training announcements covered by a pair of Iconyx IC8-R-II digitally steered column arrays. Once in the theater, guests are seated in “vehicles” which simulate motion as they transport guests on a journey depicted on a giant iMax screen. 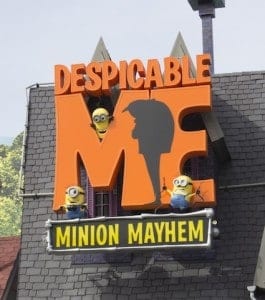 Playback in the theaters is provided by three Iconyx IC2-FR loudspeakers, bringing full-range, powerful music and sound effects to the audience, while keeping the sound focused on the passengers and away from the cavernous space’s many reflective surfaces. Seat-shaking low frequency content is pumped up by three IC212R subwoofers.