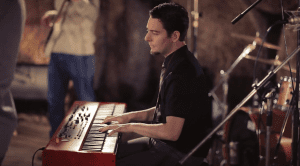 Mainz, Germany — August 2018…  Lukas Ruschitzka clearly lives to gig. The Mainz, Germany-based keyboardist and composer gets around, playing neo-soul behind singer Leona Berlin, performing hip-hop beats live in Jazzrow, rattling off jazz fusion riffs with the Julian Camargo Band, and a multitude of other projects.

He is exactly the kind of musician for whom Gig Performer was created. With so many varied performance demands, logistics plays a huge role, and that was the first thing about Gig Performer that appealed to Ruschitzka.

Ruschitzka cites the ease with which he is able to construct the most intricate systems. “In Gig Performer, you can create very complex routings and it’s easy and clear to see the signal flow. The different DAWs have buses and routing, but to really see what’s going on, you have to go into a menu or dialog. That’s not necessary with Gig Performer because everything that’s going on is right in front of you.”

While initially attracted to Gig Performer for its ease in constructing and managing his software-based performance rig, Ruschitzka became even more intrigued when he discovered the program ran cross-platform. “I use a MacBook at gigs, but I don’t like working on the notebook’s small screen at home, so I use a Windows workstation in my home studio, where I prepare the Gig files, the instruments and the routings,” he reports. So I’m using Gig Performer both in Windows and under OS X, and there’s no other VST host I can think of that can do that. I design my sophisticated sound routings on my big monitor, and when I go to a rehearsal or gig, I take my Gig files on my MacBook. They run fine and recognize the VST instruments.” 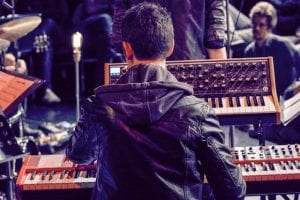 While cross-platform operation enables Ruschitzka to easily work with different computers at home and at the gig, Rig Manager performs a similar function for his keyboards and controllers.

“The Rig Manager is fantastic,” Ruschitzka enthuses, “because I can set up the system once and then just make music. I can use my studio controllers at home, and be sure when I’m on stage that everything fits as it should and I know what will happen. That’s really important to me.”

Of course, within the demands of live performance, stability ultimately outranks features, and convenience means little if the program is unreliable, admonishes Ruschitzka. “You have to mention the stability of Gig Performer when talking about using software on stage,” he asserts.

Ruschitzka digs deep in customizing his powerful performance system, and he’s a big fan of Gig Performer’s GPScript programming language, which helps him make complex actions simple to execute. He cites just one example: “In one of my bands, I had to play a passage where the filter cutoff was supposed to change with every note I played. I needed both hands to play the part, so I wrote a GP Script that altered the filter cutoff with every incoming Note On event,” he details. “This would not even be possible without some kind of special script, and it was easy to do with GPScript.” 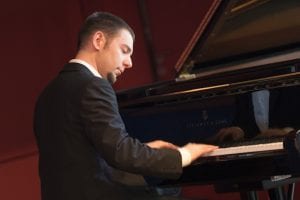 Ruschitzka points to Gig Performer as a particularly idea platform for his cover bands. “For cover musicians, Gig Performer is perfect, because you can have a sound universe for each song. You can’t do that with a synthesizer or a hardware workstation, because they are limited in some ways. But with Gig Performer, there is no real limit besides CPU power.”

Indeed, Lukas Ruschitzka lives to gig. It’s constantly evolving live production, and requires tools that are reliable, easy to use, and configurable to his shows. Gig Performer is one of those tools, and Ruschitzka has made it the center of his musical world.