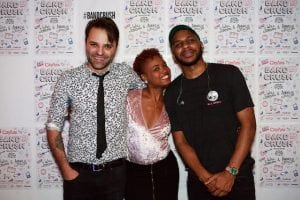 Seattle, WA—May 2018… Produced by City Arts magazine Events Manager Ryan Devlin, City Arts Band Crush is a concert and video series that celebrates the ties between Pacific Northwest musicians, uniting regional acts who admire each other’s music for special, one-night-only combined sets. The concerts are performed for a 100-person in-studio audience and captured to video, which is posted on the City Arts website.

“Band Crush is held at The Piranha Shop, which is in the building where I used to have my studio,” Button notes. “I knew someone there, and I’d worked with Ryan Devlin of City Arts several times, so Ryan asked me to mix the shows. Gary Mula and I go back quite aways and have done a lot of work together, so the shows go very smoothly. I enjoy mixing with the Mackie Thumps and DL32R; the system has worked great.”

Button employs a left-right pair of Mackie Thump15A powered loudspeakers for the mains, pole-mounted on top of Thump18S subwoofers. Four more Thump15As serve as wedge monitors, with additional Thump15As on either side of the stage as fills. “Band Crush is the first time I’ve mixed on a fully integrated Mackie Thump system,” observes Button. “I enjoyed how quickly we could get it set up and rolling, and it sounds great in that room. One tough thing about the room is the midrange and high end; cymbals and such can get pretty loud. The Thump delivers the low end needed for the drums and bass, and it has plenty of juice, so I have lots of overall headroom and never have to struggle to get vocals loud enough. We’ve had no problems at all.”

Button also uses a Mackie DL32R to mix front-of-house at a club in the Ballard neighborhood of Seattle, so he was comfortable with Mackie’s Master Fader control app for the DL32R before the Band Crush gigs. “Master Fader is really intuitive and easy to learn,” he reports. “It functions quite like a mixing board, which I like. When I work in Ballard, sometimes a band has their own engineer. I’ve been able to explain Master Fader to them, and they jump on it quickly; it’s pretty self explanatory. The new version of Master Fader has an RTA on every channel, so I can quickly zero out the room. That’s huge; I use it a lot.”

The mobility of mixing with Master Fader on an iPad proved a revelation. “Being able to move around the stage during soundcheck gave me a perspective I’d never had before as an engineer,” explains Button. “I like hearing what the musicians hear onstage. And being able to save DL32R presets quickens the process and makes it easy to use the onboard EQ and dynamics processing.” 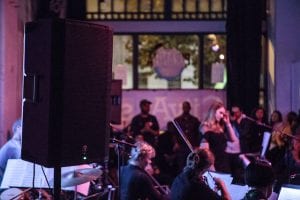 The recent Band Crush show, which featured singer, songwriter, and producer Will Jordan performing with Andrew Joslyn’s Passenger String Quartet, employed two Mackie DL32R mixers. “Andrew had his own DL16 system for submixing in-ear monitors for the string section and Will Jordan,” Button details. “I fed him a custom mix from the house DL32R aux sends 7 and 8, and he distributed it to the in-ears so the musicians could fine tune their monitor mix.”

Like Button, Gary Mula has worked on Band Crush since the first show. “I’m a buddy of Ryan Devlin, and we’ve worked together for many years,” says Mula. “He asked me to come in and do the recordings. Usually I help set up the sound gear, since I do front of house mixing as well. But with the DL32R, my laptop, and Pro Tools, there’s not much to set up. Bradford sends me a post-preamp, pre-EQ, and pre-fader, multi-channel stream from the DL32R via USB, and I have an iPad running Master Fader so I can adjust my input gain. It works great.”

Mula mixes and sweetens the shows back in the studio, delivering a stereo mix to the video editor, who syncs the audio to picture. “I get creative in the studio,” he reveals. “I like to keep it natural but really great sounding, so I do a lot of plug-in work. A few groups had just some vocalists and a backing track, so I could say, ‘Hey, I listened to your record, and you’ve got this cool guitar part or additional vocal on there that’s not on your backing track. Send me the tracks from your record.’ I throw the other tracks onto the live recording, and it sounds like it’s live.” For the show with Will Jordan and Andrew Joslyn’s string quartet, Mula added EQ on the strings and even fixed timing. “If the camera’s not right on a player, you can move the attack of, say, the cello on an important part,” he confesses. “If it helps the overall experience, I’ll do it.”

Band Crush has proven to be a fun gig for both engineers. “Each show is different and unique,” Mula observes. “Ryan has been very good at booking talented artists with followings. And the Mackie system sounds great. The DL32R is ingenious.”