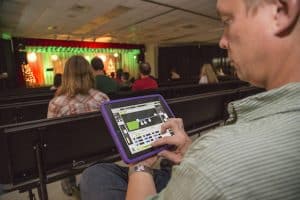 Titusville, FL – January 2015…With locations in Titusville and Port St. John, Florida, The Grove Church delivers an upbeat, contemporary worship experience to engage its growing congregation. Jason Decter mixes the sound at The Grove when he’s not at his day job, on the road as front of house engineer for Blink-182. Decter also served as production consultant for the design of the church’s main sound system.
Decter chose the new Mackie DL32R wireless digital mixer for the Grove’s portable church system. With all inputs, outputs, electronics, DSP, and power contained in a single 3U housing, the 32-channel DL32R is designed to have all mixing handled remotely via iPad, using Mackie’s ingenious Master Fader app.
“The Master Fader iPad control app is so easy to learn, and the on-board preamps and effects sound so good, it made the DL32R an easy choice,” says Decter. “The fact that there’s no physical console surface means the engineer is no longer tied to a desk, which is very cool. You can walk around, hear the sound in different locations and make adjustments. For monitor mixes, you can actually go on stage with the musicians and dial in each mix on the spot.” 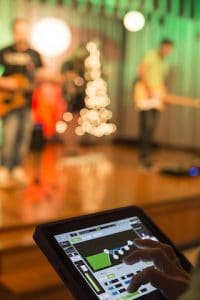 The Grove Church ministers to about 1,000 parishioners at its main location in the Titusville YMCA gymnasium, and its rock-style music presentation is right in Decter’s sweet spot. “To create a worship experience in a gym was a challenge, and we had to be creative,” he notes. “We only need about 22 input channels and seven monitor mixes, so the DL32R has more than enough mixing power in a really small package.”
But as Decter explains, one of the key assets of the DL32R was the ability to add a second iPad. “The first time we used the console, I handled both the FOH and monitor mixes,” he explains. “The following week, I split FOH and monitors between two engineers, and each had their own control surface. We could actually treat it like two separate consoles, just by adding a second iPad.”
Decter gives the Mackie Master Fader control app high marks. “You literally have every control in your hands, just like a regular console,” he observes. “The interface is so easy and intuitive. I had no problem teaching my mixers everything they needed to learn inside of an hour.”
To control the sound in the highly reverberant gymnasium environment, The Grove Church puts up sound-absorbing pipe-and-drape around the periphery and uses a compact Mackie HDA line array. “It’s a great speaker choice for the room size in terms of focus and control,” says Decter. “It definitely does not sound like a gym!”
“These days, every digital console has some sort of wireless app, but they tend to be limited,” Decter continues. “The fact that the DL32R literally has no physical control surface shows just how powerful the Mackie Master Fader app is. You have real-time control of everything, including input trim, DSP, EQ, even setting and recalling scenes. Considering that the only hardware is what looks like a rack-mount stage box, it’s a pretty amazing set-up.” 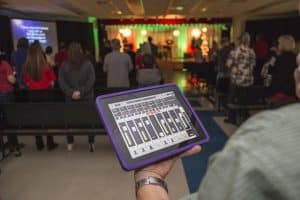 Decter feels strongly that mobility provided by full-featured remote mixing is a strong positive for the engineer. “Mixing at a lower SPL is common in a church setting, and it takes some finesse,” he says. “With no fixed front of house position, it almost forces you to walk around a bit. It makes the whole room your space. It keeps your ears sharp, so if there’s a problem with speaker alignment, you’ll know.”
Designed as a disruptive new approach to mixing, the Mackie DL32R has taken the promise of digital audio to a new level of control. By replacing the conventional mixing surface with a Wi-Fi router and iPad, Mackie has packed a full range of professional features, including remote recording and playback capability, into a compact, affordable package.
“The DL32R delivers everything we need for The Grove, and a lot more,” Decter concludes. “That means we have room to grow, and it still costs far less than any comparable mixer. We’re really happy with it.”