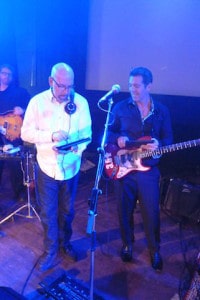 Montreal, Canada – March 2015… Long before wireless digital console control was an option, independent FOH engineer Richard Forte created his own, rigging a system using a computer and USB. His hack wasn’t entirely reliable but his clients loved it, and he earned a reputation for delivering services that competing sound companies couldn’t.
It’s no surprise, then, that Forte is a fan of Mackie’s new, iPad-controlled, rack-mount DL32R digital mixer. “I wanted a platform that was designed from the ground up to physically do what I need to do most of the time, which is to go wireless,” Forte explains. “The DL32R is the first digital console I’ve used that offers a purpose-built app for wireless control, with full iOS control of every parameter on the desk.”
Based in Montreal, Canada, and known for his FOH work with artist Nikki Yanofsky, Forte has mixed live events for more than 35 years, including a host of international tours and high-profile corporate events. “I have a 64-channel rig, and I do some pretty large-scale shows, but that’s overkill for a lot of clients,” Forte explains. “With the DL32R, instead of bringing out a van full of gear, I can offer an affordable, 32-channel rig I can fit into a flight-case-style briefcase.”
The ability to control the system wirelessly with Mackie’s free Master Fader app has made Forte’s work easier in a variety of ways. “Obviously, the ability to mix from anywhere is something I’ve long appreciated,” he observes. “Space can be at a premium with corporate gigs, but with no need for a mixing station, I don’t worry about that. I can even set up the DL32R onstage so we don’t need to run a snake. And the sound quality is pro all the way: EQ and compression is clean and powerful and offers tons of control, and the noise floor is noticeably quieter than my large-format console.” 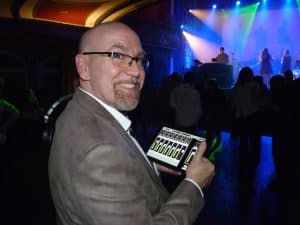 The ability to allocate control of selected parameters to others via additional iOS devices will be a plus on upcoming tours, he notes. “Like a lot of musicians, Nikki prefers to mix her own in-ear monitors, and we’ve used a personal IEM system for years. With the DL32R, she’ll be able to control her monitor mix without the need for any additional gear, and  mix her monitors using only the My Fader app on her iPhone.”
Forte also mentions the DL32R’s functionality as a plug-and-play multi-channel audio interface to record and playback from an external DAW or hard drive. “Anything that allows the band to spend less time at sound check is a benefit to them and everyone else, and the on-board record and playback capability of the DL32R allows me to complete the lion’s share of the sound check before the band’s backline is even patched,” he enthuses. “The computer-less virtual sound check capability of the DL32R is a one-of-a-kind feature, and it made it the must-have console for me.”
But he cites the intuitive Master Fader app as a game-changer. “When I’ve mixed wirelessly on other consoles, I’ve always had to think about how the channels would display on a wireless device, where I could only see eight channels at a time. This typically results in a pretty unconventional channel layout,” he observes. “For monitor engineers, they’re used to a certain ergonomic convention on their desk: faders left to right, the drums together, vocals together, horns together, and so on, and this was always a bit problematic. Now, with Master Fader’s custom fader groups, I can have wireless control and maintain a conventional console patch.”
For Richard Forte, 2015 holds a full calendar of touring and corporate events, and he’s already looking forward to taking the DL32R out on the road. “It’s a great sounding mixer, and it’s a solid, well-built piece of Mackie gear, with no moving parts except a power switch and a headphone knob. In its flight case, it will survive even airline baggage crews.”