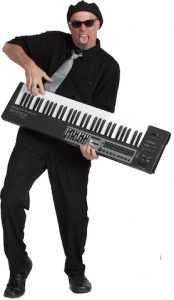 Salt Lake City, UT – April 2015… More than three decades after joining his first band, keyboardist Lee Sebel has led a wide and varied career. Coming of age during the nascent days of the synthesizer, Sebel cut his teeth working with many of the legends of electronic music, including Bob Moog, Ray Kurzweil, and Ikutaro Kakehashi, founder of Roland and inventor of the drum machine. His own accomplishments include programming the sounds for Roland’s original Juno 60, and presenting the first demonstration of MIDI to the public in 1983.
Despite his years on the tech side, he has never lost his love of performing, and continues to gig regularly with several bands in his home town of Salt Lake City. These days, technology has finally caught up and enabled him to radically pare down his rig.
“I’ve gone from carrying 100 pounds of gear to carrying a single keyboard and a Mackie DLM12 powered loudspeaker,” he reports. “I do a lot of corporate gigs, and for those kinds of gigs, less is definitely more.”
He cites the DLM12 as an indispensible part of his arsenal, enabling him to hold his own in what can sometimes be a crowded mix. “One of the most challenging issues on most gigs is keeping up with guitar players,” he observes. “Particularly in a setting where I’m playing with two or more guitarists, things can get pretty loud onstage. I discovered the DLM12 at a trade show a couple of years ago. When I heard it had 2000 Watts of power, I knew I had to have it.” 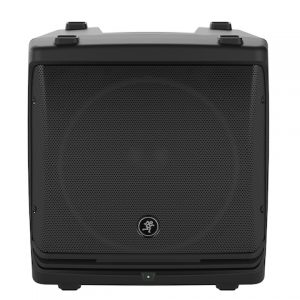 As Sebel explains, volume is only part of the challenge. “When you’re talking about working with guitar players, it’s not just a question of volume but also of tone. Since both instruments occupy a common frequency range, things can get pretty muddy and undefined. The DLM12’s EQ gives me an amazing amount of control over my tone, so I can notch out just the right frequencies and overtones to stand out in the mix.”
Sebel says the DLM12 is more than enough for most of the mid-sized venues he encounters. For larger halls, it easily pulls double duty as a personal monitor. “I use the XLR output to send my feed right to the FOH mixer,” he says.
“The DLM12 really gives me everything I need,” Sebel concludes. “With this little 35 pound box, I get to hear what I need and don’t get drowned out by the guitar player anymore. The price-to-performance ratio is simply unmatched.”