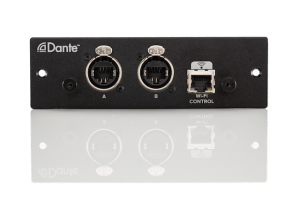 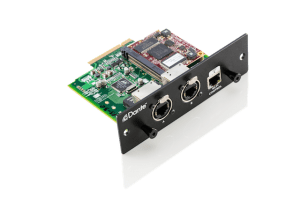 “Dante is the clear choice for AV networking,” says Ben Olswang, Mackie Senior Product Manager. “Dante allows the DL32R to connect to hundreds of Dante-enabled audio devices with the seamless interoperability and ease of use that are hallmarks of Mackie products. Dante software is simple and complete, and takes the mystery out of networking while delivering incredible performance.”
“The Mackie DL32R has had amazing market response, and we are incredibly pleased to add Mackie to the list of our 190 plus manufacturers using Dante,” adds Lee Ellison, CEO of Audinate. “Their products have long been favorites of musicians and sound engineers. The DL32R with Dante brings Mackie sound and usability to AV networking, allowing users to easily deliver audio where they need it, when they need it, with no compromises.”
The DL Dante Expansion Card ships with a license for Dante Virtual Soundcard software, allowing direct recording/playback of up to 64 channels of audio from any Dante network to a PC or Mac computer.
For more information on the Mackie DL32R 32-Channel Wireless Digital Mixer with iPad Control please visit dl32r.mackie.com.
iPad is a registered trademark of Apple Inc., registered in the U.S. and other countries.
Wi-Fi router and iPad required for operation. Not included.