Producer Rob King Puts the SLAM! On the Mix 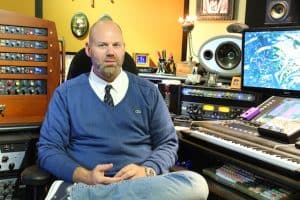 Sherman Oaks, CA – January 2015…  While he may not be a household name, you’ll find Rob King’s work pretty much everywhere you turn. The veteran producer/composer has been the force behind the sound of more than 100 hit games, including James Bond: Quantum of Solace, Scareface, Age of Conan, Call of Duty 3, and MMORPG RIFT: Planes of Telara. He’s also had a hand in numerous films, including promo trailers for I Am Legend and Watchmen.
With a busy, fast-paced production schedule, King’s Sherman Oaks, CA-based Green Street Studios is constantly abuzz with projects. The facility boasts racks full of impressive high-end outboard gear, but King points to the Manley SLAM! as his go-to stereo limiter and mic preamp.
“Out of all the gear in my studio, the SLAM! gets used more often than almost anything else,” he reports. “I’ve often said it’s a shame more people don’t have the opportunity to hear what it can do. I do a lot of dialog production in games, and I find that the SLAM! is really the ultimate signal path for a voice over.”
As King observes, creating dialog voiceover for games is a meticulous and demanding process. “Particularly in doing dialog within a game, it’s always tricky to get things to sit right in the mix,” he explains. “Running the dialog through the SLAM!, I usually just set the input and output gains to 12 o’clock, with the heel of the limiter anywhere between 18 and 22dB, and I literally never have to touch it. Whether it’s whispering, shouting, screaming, talking — it all sits there perfectly, with no distortion, no audible compression – it’s just incredible.”
King points to the SLAM!’s optical compressor as one of the features that sets it apart. “The SLAM! gets a real tube preamp kind of sound,” he says. “It’s got a ton of clarity, it’s super smooth, and so rich in frequency. You get all the lows, all the highs, and zero sibilance – I’ve never had to even think about a de-esser.”
Whether for spoken word dialog or for music production, King says the Manley SLAM! delivers more than enough compression with a minimum of coloration. “I have a lot of compressors in the studio, and I like them all for their different sound,” he states. “But the SLAM! is really nothing like anything else. It is so clean and natural sounding. It’s like a compressor that doesn’t sound like a compressor. Nothing will get something to its place and keep it there naturally as the SLAM! does.”