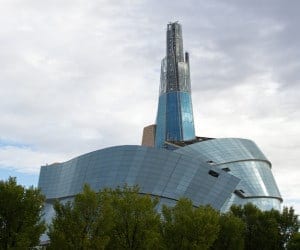 Winnipeg, Manitoba – February 2015… With a portfolio that includes high-profile museums, performing arts centers, corporate settings, and high-end residential theaters, Milford, CT-based SH Acoustics has gained a well-earned reputation in the rarefied world of sound design for some of the world’s most challenging acoustical spaces. For the new Canadian Museum for Human Rights in Winnipeg, Manitoba, the combination of open architecture, reflective surfaces, and a plethora of multimedia-based exhibits made the firm the preferred choice as acoustic and audio design consultant.
SH Acoustics President and Principal Consultant Steve Haas was invigorated by the challenges the museum presented. “What makes this building unique is the open nature of the architecture,” he explains. “The walls and ceilings rarely meet, and there are few if any right angles. There are literally no doors in the galleries. Even the glass exhibit walls are unique, with open, overlapping ‘shards’ instead of a flat surface. To achieve focused sound in the exhibits and galleries and, more importantly, to control it, required a lot of specific audio gear, acoustical treatments, and careful planning and calibration.”
Renkus-Heinz loudspeakers and steerable array systems proved to be a key tool in realizing the promise and goals of the museum space. “I have had great success with Renkus-Heinz in similarly challenging spaces, especially their Iconyx arrays,” says Haas. “The pattern control and fidelity they offer are ideal for applications like this, which require working closely with architects, engineers and AV designers to deliver the intended sound without bleeding throughout the exhibit galleries.” 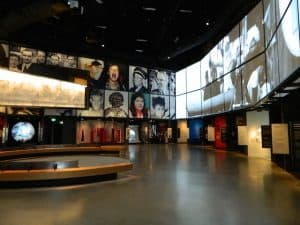 Haas cited the Canadian Museum for Human Rights as among the Company’s more challenging recent projects. While the ten main galleries are spread throughout the building’s seven levels, each floor is acoustically coupled to at least several others, with open architecture, reflective glass walls, and oddly-placed criss-crossing ramps connecting and passing through all the galleries. SH Acoustics worked with Electrosonic, a US-based international AV integration firm, and over a dozen media producers from all around the world, to ensure its sound designs would translate accurately to the museum space.
“We used a lot of different techniques to coordinate between the acoustics and audio,” says Haas. “Some were very localized and focused, while other spaces needed a widespread soundscape. In the mini-theater settings, Renkus-Heinz gear was involved in a big way. We used the TRX and CF Series speakers, some with PN112 subwoofers, as primary front delivery speakers behind the screen, because we’ve come to know the preciseness of their radiation pattern.”
For some of the wider theaters, off-axis response naturally became an issue, again with a Renkus-Heinz solution. On the upper level, the “Canadian Journey” gallery utilizes two IC16-R-II digitally steerable line arrays, augmented by PN Series subwoofers. “The Canadian Journey contains dozens of local media experiences, but comes alive each hour with a sound and light show projected on large screens, plus a powerful presentation with live actors,” explains Haas. “The Iconyx digital beam steering makes it easy to transition between the two programs.” 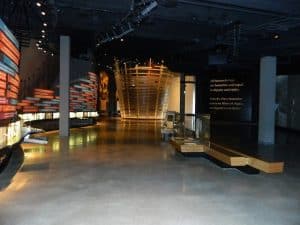 The mechanically steerable Iconyx IC7 series also found a unique use in the museum’s primary gallery for the multimedia presentation, “What are Human Rights?” Haas explains the challenge: “The screen and seating area are roughly 90 feet wide, with multiple video projectors. We needed low-level localization of sound to cover that very wide bench in a very precise way.” The solution was to use four IC7-II mechanically steered arrays, aimed from above complemented with compact subwoofers embedded in the bench itself and a series of seven TRX speakers behind the large scrim. This provided full-range, focused sound to listeners, while still localizing back to the images on the screen. Strategies like this also helped to avoid interfering with the building’s ceiling speakers, which are required for paging.
Designed by acclaimed architect Antoine Predock and Exhibit Designer, Ralph Appelbaum, the Canadian Museum for Human Rights opened on September 19, 2014 to outstanding reviews. For SH Acoustics, it was another in a long line of acoustical challenges met and conquered. “It’s quite an ingenious design – one of the most fascinating buildings I’ve ever been in,” says Steve Haas. “With both large theaters and small interactive displays in an open acoustic environment, you really have to play with the laws of physics to make it all work together. But with tools like the Renkus-Heinz speakers we’ve come to rely on, it really came together nicely. Everyone is extremely pleased.”