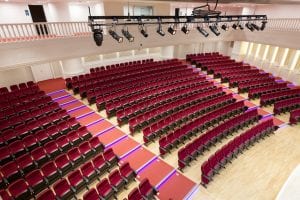 Istanbul, Turkey—May 2018… Istanbul’s large, densely populated Üsküdar municipal district was founded in the 7th century BC and is one of the capital city’s oldest residential areas. Situated on the Anatolian shore of the Bosporus Strait, the area is known for its high concentration of historic buildings and religious sites. Üsküdar’s Town Hall, however, is new and entirely modern. The complex, which serves as a multipurpose community center, includes two auditoriums, a multi-purpose hall, a cocktail hall, and a basketball arena. All of these spaces are served by sound systems based on Renkus-Heinz digitally steered line arrays.

The two pizza-slice-shaped auditoriums, dubbed Red Hall and Blue Hall, each seat 442 people, although the Blue Hall is slightly larger. Each features a 7 meter (23 foot) ceiling and a balcony without seats that wraps around the room from one side of the stage to the other. The mostly plasterboard ceiling includes four metal acoustic panels in the middle, and the walls are half wooden panels and half fabric-covered acoustic panels. 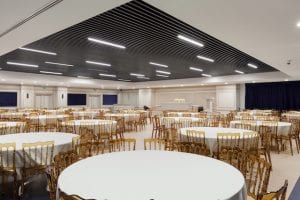 “With Renkus-Heinz’ steerable beam technology, we were able to cover the Red Hall and Blue Hall with the best sound, using the minimum number of loudspeakers,” explains Burcin Cakin of AV systems integrator Eramita, which designed and installed the AV systems for the entire Town Hall facility. “The beams deliver the sound to the seats and keep it off the walls and the face of the balcony. The IC Live Gen5 series is suitable for a wide variety of music and other programming, especially when paired with PN-series subwoofers, which made it the right choice for these halls.”

The elegant Cocktail Hall, which is also pizza-slice-shaped, is replete with rich, red drapery and has a sloped ceiling that rises from 4.5 to 4.7 meters (14.8 to 15.4 feet). Here, too, the main system features a pair of Renkus-Heinz IC-F-RN arrays, which match the wall color between sets of drapery so well one barely notices them. Neither subwoofers nor fills are needed but the wide, low stage is served by two Renkus-Heinz CF121M-2 stage monitors. The Roland M-200i console in this space is conveniently rack-mounted.

Beautifully set up for banquets and other events, the rectangular Multi-Purpose Hall features extensive glass façades covered with royal blue curtains. The sound system in this space again employs two Renkus-Heinz IC-F-RN arrays, two Renkus-Heinz CF121M-2 stage monitors, and a rack-mounted M-200i console. “In the Multi-Purpose Hall and the Cocktail Hall, Renkus-Heinz beam steering enables us to provide intelligible, very high quality sound for both speech and music throughout the room, without overpowering any area,” Cakin asserts. “Patrons enjoy clear, accurate sound without feeling overwhelmed. Yet the system easily has all the power we need.” 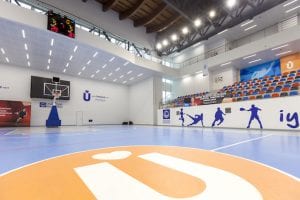 The indoor basketball arena seats 800, including bleacher-type lower seating and balconies on both sides. With ceilings that vary from 12.65 to 15.95 meters (41.5 to 52.3 feet) and painted plaster walls, intelligibility and high reverberation times were major issues. For this more challenging space, the Eramita team chose a pair of Renkus-Heinz ICONYX Gen5-series IC32-RN digitally steerable arrays, each which enables up to 16 beams to be individually shaped and aimed. These main arrays are mounted to the left and right of the court, at the end of the seating areas. A pair of ICONYX IC8-RD arrays, each of which can deliver up to four steerable beams, series serves the entrance area. “Given the intelligibility and reverberation issues in the arena, Renkus-Heinz ICONYX loudspeakers were the only possible solution,” observes Cakin. “The acoustics here could only be properly addressed with precision beam steering. The client was very impressed by the results.”

Two Renkus-Heinz CF121-2 powered two-way Complex Conic loudspeakers serve as fills for the left and right balconies. The CF121-2 is similar to the CF121M-2 but the latter is primarily used for stage wedges and foldback systems, while the CF121-2 is more often employed as unobtrusive mains or as fills in a larger system, as in the Üsküdar basketball arena. 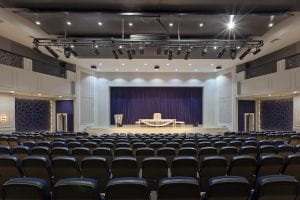 Although sound quality and digital beam steering were paramount reasons for choosing Renkus-Heinz arrays, they were by no means the only benefits. “The Renkus-Heinz arrays blend in very well visually, which is important in all of these spaces,” Cakin points out. “In addition, with Renkus-Heinz, we did not face any problem in terms of logistics or scheduling. Finally, by choosing Renkus-Heinz, we were able to meet each room’s audio needs with the minimum number of loudspeakers, while staying within the budget, which made us and the client very happy.”