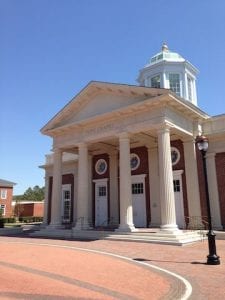 Newport News, VA – February 2015… Christopher Newport University recently took the wraps off its newest addition, the non-denominational Pope Chapel. The 10,000-square-foot building stands at the entrance to the University and includes state-of-the-art audio, video, lighting, and media systems, including a powerful and versatile audio system centered on the digitally steerable IC2 (IC Squared) array from Renkus-Heinz.
Tom Beaudry, Owner and Senior Designer of Chesapeake-based design/build specialists Onyx AudioVisual, worked together with Erik “Ketch” Kelly, audio engineer for CNU’s Ferguson Center for the Arts to design the systems. As Kelly explains, versatility was a key requirement for the new venue’s sound system.
“The chapel is used for meetings and services by various campus religious groups, but also hosts weddings and musical programs, so the system needed to be versatile enough to deliver a wide range of program material,” explains Kelly.
The 350-seat chapel’s stunning Neo-Georgian architecture is beautiful to behold, but notoriously reverberant, making spoken word intelligibility a critical issue, and making it an ideal candidate for a digitally steered array. As Beaudry observes, the IC2 delivered the best of both worlds.
“We needed a high performance, high fidelity, system that could deliver intelligible speech in a highly reverberant space,” explains Beaudry. “The IC2 system gave us the pattern control of a digitally steered array, but with the full range musicality and output power of a point-source array.” 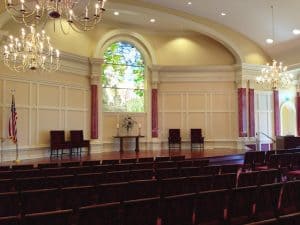 Just two self-powered IC2-FR cabinets cover the entire room, each hidden behind scrims in two small soffits above and on either side of the stage area. “We basically needed a compact, invisible sound system that was robust and flexible enough to be used for anything, even an occasional rock band,” says Kelly.
In fact, the IC2 system delivered more than enough power, says Beaudry. “We had originally specified two boxes per side, and were a bit apprehensive when we learned that there was only room for one. But we have more than enough volume from just a pair of IC2 cabinets.”
A big test for the system came when the university decided to add a pipe organ to the room. “That was not part of the original design concept for the chapel, and we were a little concerned because of the wide frequency spread of the instrument,” says Kelly. But as Beaudry notes, “the IC2 easily handles the full range and impact of the organ. It really confirmed that we had made the right choice for the room.”
Beaudry concludes, “for a space like Pope Chapel, we had to design a system that delivered great intelligibility as well as the power and performance for a wide range of source material. And it had to have a footprint that was virtually invisible. The Renkus-Heinz IC2 does exactly that – even when you can’t see it.”