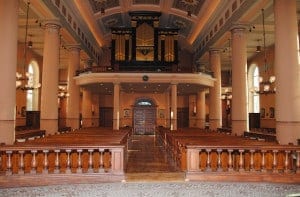 St. Louis, MO – March 2015…  Consecrated in October of 1834, the Old St. Louis Cathedral was built in the Roman Catholic tradition of grand, highly reverberant worship spaces. Known formally as the Basilica of St. Louis, King of France, it was the first cathedral built west of the Mississippi River. Today, it stands in the shadow of the Gateway Arch. As part of a major renovation, the archdiocese engaged St. Louis-based Tech Electronics to address the sanctuary’s ongoing audio issues – most notably a lack of spoken word intelligibility and an outdated, inefficient PA system.
“The Cathedral has been known as acoustic nightmare for many years,” explains Tony Badamo of St. Louis-based Tech Electronics. “When we heard they wanted to upgrade their audio system, I knew immediately that Renkus-Heinz Iconyx was the right solution for the space.”
Iconyx digitally steerable column arrays are designed to precisely focus full-range audio content, providing consistent coverage where it’s needed while avoiding the unwanted reflections that make speech difficult to understand. “The natural reverberation that makes the organ and choir sound so amazing, also makes the human voice difficult to understand,” explains Badamo. “Iconyx digital beam steering enables us to overcome that conflict without a lot of visual distraction.” 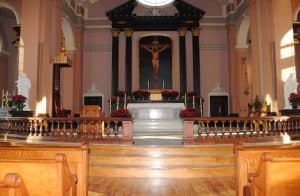 The entire sanctuary is covered by two IC24-R-II columns, mounted beside two structural columns on the wall behind the altar. With its low profile design, Iconyx integrates seamlessly with the church’s classic architecture, and the columns’ custom paint job helps them virtually disappear in plain sight. “Any other solution involves hanging large, boxy speakers in the sanctuary, usually with acoustical treatment in the room,” Baldamo observes. “In most cases, it creates a visual distraction without really addressing the intelligibility issues.”
The two Iconyx columns are aimed in crossfire fashion to the opposite corners of the sanctuary. Using the system’s RHAON software, Badamo created a series of audio beams to provide focused direct coverage throughout the room, while avoiding unwanted reflections off walls, balcony facings, windows, and the classic vaulted ceiling.
“Iconyx enables us to create a custom coverage pattern that is amazingly even in every seat,” reports Badamo. “You can actually sit in a pew directly behind one of the huge structural columns and understand every word perfectly.”
The church’s audio makeover also includes a pair of Renkus-Heinz ICX7-II steered array columns, delivering clear, full-range sound to the altar without the visual distraction of floor wedge monitors. To provide a direct monitor feed to the balcony choir loft, Badamo selected full-range, 2-way Renkus-Heinz TRX81 loudspeakers.
For Tech Electronics, solving the audio issues of this historical landmark with Iconyx beam-steering technology is a source of pride. “Based on our experience in traditional churches, Iconyx steerable arrays are our go-to solution,” Baldamo concludes. “They just work.”