Renkus-Heinz Solves Daunting Issues at Church of Our Saviour 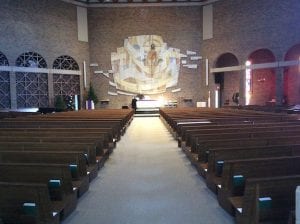 A small brick church built in 1851 was the first home of Jacksonville’s Catholic Church of Our Saviour, followed by a new building in 1868. The current church, which is modeled after the Basilica of San Vitale in Ravenna, Italy, opened in 1977. The adjacent Our Saviour school is the home of the Illinois School for the Deaf, so the parish is especially sensitive to the needs of the hearing impaired. Recently the church sanctuary was remodeled, including a new sound system designed by independent acoustical engineering firm Designed Acoustics of St. Louis and based on Renkus-Heinz ICONYX Gen5 digitally steered arrays.

“Since the church was built, they’ve fought with intelligibility of the spoken word,” reveals Designed Acoustics president and senior engineer Kevin Tankersley, who designed the new system. “They’ve had four or five sound systems, including the traditional cluster hung up high and, most recently, a distributed system of small speakers mounted about eight feet up, all the way around the room. Nothing worked; they still had poor speech intelligibility.” Finally, the parish was fed up. Graham and Hyde Architects, which oversaw the remodel, hired Designed Acoustics to recommend a solution.

“The church is shaped in an octagon and made of solid brick,” Tankersley explains. “The walls are 40 feet tall, the center peak is about 48 feet tall, and there are only a few windows on the upper edge of the walls. It seats about 900 people. The choir is on the floor, there is no loft, it’s all one level. As you can imagine, we had to keep the sound off the brick in this towering octagon. Also, they only have live music; they don’t allow taped or recorded music. They have a small choir, a piano, and a pipe organ, and they occasionally have guitarists. So we didn’t want to deaden the room but we did need to condition it.”

A big part of the solution was the Renkus-Heinz ICONYX steerable loudspeakers. “But we needed to fix the room, even if we used a steerable array,” Tankersley asserts. “We had to soften up some of that surface. There would normally be aesthetic issues with treating the room but after struggling with intelligibility for years, they wanted it fixed, even if it meant an unconventional look.”

Designed Acoustics made three acoustical models of the room. “The first had a lot of acoustical treatment and a conventional sound system that would be better than the old system but not a true fix,” Tankersley relates. “The second design had a little less acoustical treatment and a line array for a little more focus but not as steerable as a Renkus-Heinz array. The third and best option was the Renkus-Heinz ICONYX system. We told them the ICONYX system is highly steerable, so we can dictate where the sound is going to go, and we’d only need a little bit of acoustical treatment in the correct places—and the room would be wonderful. This was the best scenario. We showed them in a graph what the sound and reverberation time would look like, and they chose the Renkus-Heinz system.” 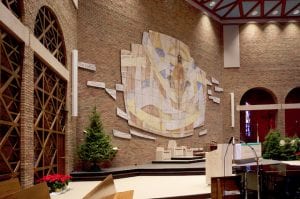 Tankersley specified a pair of Renkus-Heinz ICONYX Gen5 IC24-RN arrays, mounted eight feet off the floor and placed left and right behind the altar, “which kind of blew everybody’s mind,” he admits, “but they love the results. We had to steer the beams around the altar microphone and the cantor microphone, while avoiding the brick walls.”

Getting the sound just right was even more important because the parish’s Our Saviour school is the home of the Illinois School for the Deaf. “I put in a Hearing Technologies ListenLoop hearing loop system, which is a wireless system for the hearing impaired that goes in the floor and automatically connects to their hearing aids when they walk in,” Tankersley reports. “Hearing is very important to this parish, which is why we proposed the Renkus-Heinz ICONYX with acoustical treatment.”

An eight-channel Allen & Heath analog mixer sits out by the choir and next to the pianist and organist, accommodating those sources, as well as guest musicians. The mixer and the altar and cantor microphones use feeds in the floor to send to a Biamp AudioFlex processor, which routes to the Renkus-Heinz main system, the ListenLoop system, and small point-source systems in the cry room and other side spaces. All connections are analog. The system is controlled with a Biamp RED-1 wall control panel located at the rack and programmed with presets for various types of events.

The combination of acoustical treatment and the Renkus-Heinz arrays was key at the Church of Our Saviour and at many other Designed Acoustics projects. “As acoustical engineers, we recognize what Renkus-Heinz is doing, and we take advantage of that,” Tankersley emphasizes. “Designed Acoustics feels a quality room is a combination of both treatment and the right loudspeakers. Renkus-Heinz speakers are flexible because of their precision beam shaping and steering, and when we treat the room properly, we can customize the response of the loudspeakers to address the remaining issues rather than making the loudspeakers solve all of the issues.”

Because the parish allowed acoustic treatment and opted for Renkus-Heinz digitally steered arrays, they finally have the system they’ve always wanted. Live music sounds great, and speech is clear and intelligible. “We’ve heard nothing but good things from the parish,” reports Tankersley. “The project at Our Saviour has turned out wonderfully, and we’re proud of it.”