Robert Frazza at FOH: Around the World with Gig Performer 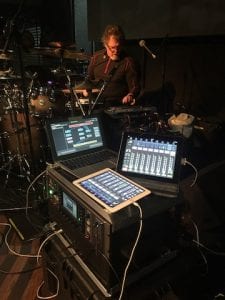 Woodstock, NY – June 2018… As an audio engineer, you could say Robert Frazza has been around the block a few times. More accurately, he’s been around the world a number of times. His live sound engineering client list stretches over four screens on his website, from Average White Band and Adrian Belew to Warren Zevon and Youssou N’Dour. His touring and recording history is liberally salted with work with artists from the King Crimson and Peter Gabriel musical families (including Tony Levin, Bill Bruford, and Jerry Marotta), and he packed a dozen people plus stage gear and lighting into a single tour bus with a trailer for Todd Rundgren’s 2004 Liars tour.

The extreme limitations on how much he could carry on the Rundgren tour changed his basic approach to live sound, and the system he devised then anticipated by a decade the current trend of using rackmount mixers controlled from an iPad. But Frazza had long ago moved on to the next problem: a comfortable and reliable way to use plugins live.

Initially, Frazza used Apple Logic as both a multitrack recording platform and a plugin host at FOH. “It was rudimentary, but what I needed was an environment where I could build processing chains for each song, and have multitrack recording, as well,” he asserts.

Frazza’s future changed when he was asked by drummer Marotta, a longtime client, to come work with his latest effort, The Security Project. The band’s keyboardist, David Jameson, watched what Frazza was trying to do with Logic at FOH and said he thought he had a better way. Jameson a former IBM computer scientist, was co-creator of Gig Performer, and was using it himself with Security Project.

Gig Performer’s intuitive UI and flexible structure was the perfect vehicle for Frazza to build multiple sophisticated processing chains he was implementing at FOH, with extensive remote control. The program’s version 2.0 release added the Audio Input Recorder, enabling him to capture multitrack audio from his interface’s inputs. So it was Gig Performer that Frazza took out on the Security Project tour. 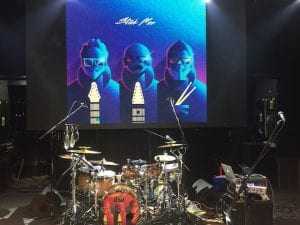 “It’s pretty intense what David has going on playing keyboards in Security Project,” Frazza reports. “He’s doing all of the keyboard parts from Larry Fast and Peter (Gabriel) together, using Gig Performer for everything. It’s all in one laptop.”

At FOH, Frazza has constructed sophisticated plugin chains in Gig Performer that he stores in presets. His entire FOH setup now consists of a rackmount mixer and Gig Performer, all of which can be controlled from an iPad.

“If you have 20 songs in a show, each song can be configured for tempo and however many plugins you need for voice, drums, or whatever,” Frazza explains. “Each song can be saved as a completely different scene, with triggered changes from an iPad. So a rackmount mixer and a laptop sit on stage, and I’ll be in the middle of the venue triggering changes.”

Sitting in the middle of the venue is a big deal, because venues famously hate sacrificing some of the best seats in the house to an extensive mixing station. Frazza’s console often was banished to the side of the room or some other ill-sounding spot. Now, Frazza hears what the audience does, and can execute sophisticated changes remotely.

The portability of having his entire audio front end in an eight-space rack and an iPad ensures much greater consistency across a tour, as well. “I travel all over the world,” says Frazza. “Before, we would be getting different gear at every venue. The fact that now we can show up in South America or Japan or Australia or wherever and know we will have the same monitor mix, just by carrying one extra bag on a flight with a laptop that accesses the plugins…that’s a pretty powerful system. Our sound checks are literally three minutes long, because everything is fully recallable.”

Frazza is impressed by all of this, not just for himself at FOH, but for his clients, as well. “Bands like The Security Project are playing 200-500 seat venues, pretty small places, but going out with a rig that, 10 years ago, would have been unheard of. It’s a pretty advanced setup for an act this size.”