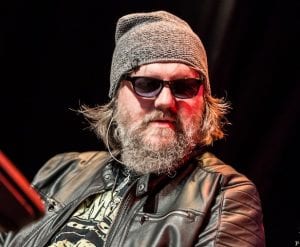 Hamburg, Germany – August 2018…In his work with Bobby Kimball and Ian Cussick, Jens Skwirblies is often called upon to produce the sound of vintage keyboards. Those sounds are equally in demand when he gigs with the current version of Lake, a band prominent in 1970s Europe, as well as with The Magic of Santana, Europe’s premier Santana tribute band featuring former Santana vocalists Alex Ligertwood and Tony Lindsay.

Rather than haul vintage, temperamental instruments around from his studio north of Hamburg, Germany, Skwirblies uses virtual versions of them running inside Gig Performer software.

Before finding Gig Performer, Skwirblies tried several solutions that never quite worked out. A rackmount unit dedicated to hosting VST instruments and plugins was orphaned when the manufacturer closed its doors, and a well-known Mac software plugin host could never satisfy his priorities. “It was a hassle to program,” he complains. “To make a basic connection, I had to go into the mixer section and search for where the signal was coming from. I was really fed up with the whole thing.”

The program also consumed far too much CPU power. “Running the same synths I use now, I had to adjust the buffer settings until I was up to a sample buffer size of 512 milliseconds of latency, which always felt a bit weird. Even if I switched off internet, Bluetooth, and other unneeded functions, it still crackled from time to time with more complex instruments, particularly if I played big chords.”

Then Skwirblies’ performing life changed. “A friend of mine told me about Gig Performer. I took a look at it and bought the first version, about a year and a half ago. From that moment on I’ve worked with it,” he recounts. 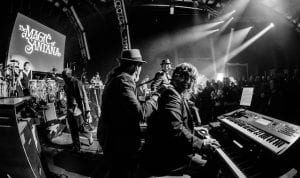 The same tasks that were so hard in his old software system suddenly became refreshingly easy. “Making connections is one of Gig Performer’s great strengths,” states Skwirblies emphatically. “It’s so easy to do in the Connections screen. I just draw in the cables and instantly get the sound as I want. If I remove a cable, it’s immediately disconnected. I don’t have to think about whether I need to switch something off or where the MIDI signal is coming from. MIDI filtering is easy, too; there’s a list with all of my instruments and I can quickly enable or disable what I need or don’t need.”

Gig Performer reduced resource usage as much as it increased ease of use. “Even using Gig Performer heavily, with all of my synths playing, I’m never up to more than 20 percent or so of CPU usage, and I’m down to a sample buffer size of 125 ms of latency from the interface.”

Skwirblies’ needs are not very complex, but reliability and usability are essential, and Gig Performer fits the bill. “I’m an old school guy,” confesses Skwirblies, “but I’m into technology, and computers onstage sometimes hiccup. So my main goal was to keep things straight, simple, and easy, and not have things running in the background, to keep the system stable. Since I have been using Gig Performer, I have never ever had a single glitch. I start the program and, every time, my file is there and there are no problems. It’s rock solid.”

Beyond the program’s features and performance, Skwirblies feels he is in good hands with Deskew Technologies, Gig Performer’s developers. “The support is great and fast. If you have a question, you get an answer. Because David (Jameson, co-developer of Gig Performer) uses it live himself, he knows what is working and not working in the program, and understands the needs of keyboard players. I’m really, really satisfied.”