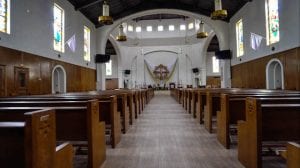 Gilroy, CA—July 2018… Now part of the Roman Catholic Diocese of San José in California, St. Mary Parish was founded back in 1865. The current St. Mary of the Assumption, dedicated in December 1965, is the third church on the site. The sanctuary is lovely but with its cruciform design, it presents acoustical challenges. At least three previous sound systems failed to provide satisfactory coverage and spoken word intelligibility before Robert Croft AV of Milpitas, California, designed and installed a system based on Renkus-Heinz ICONYX digitally steerable line array loudspeakers. That changed everything.

Pastoral associate Rose Barry has been a St. Mary parishioner since 1989 and joined the church’s staff in 2003. Although her main focus is liturgy, she has a technical background, so she also became the go-to person for technology questions and issues. Barry has seen sound systems come and go at the church and understands the room’s challenges.

“Our main concern has been the spoken word, of which there is a lot at Mass,” Barry notes. “Although there are documents on music in the church, there’s not much about the technology of acoustics, so every pastor is left to figure out acoustics in his church. Our first loudspeakers were installed in the light fixtures, making the sound come down on people’s heads. The next system used great big speakers at the foot of each nave, which projected toward the people but didn’t project very well. No system we tried solved our intelligibility and coverage issues. Then I was introduced to the Renkus-Heinz steerable column speakers and heard examples of what they can do in spaces similar to ours. I immediately started fundraising.”

“I thought the Renkus-Heinz ICONYX would be a great fit for the room, not only acoustically but also because of their small footprint,” explains Bob Croft, owner of Robert Croft AV. “We installed two ICONYX Gen5 IC16-RN loudspeakers for the main nave. With Renkus-Heinz’ beam steering technology, I could aim them in such a way that we have uniform coverage throughout the whole area. We put one IC8-RN in each of the two smaller naves, which gave us good coverage in each.” 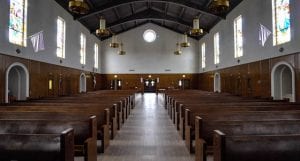 The Renkus-Heinz ICONYX Gen5 IC16-RN features 16 4-inch coaxial transducers, each with 3 high-frequency tweeters, along with 16 amplifier and DSP channels. Each column can deliver up to eight steerable beams, which can be individually shaped and aimed using powerful, software-controlled DSP. Beam control is effective down to 400 Hz. The smaller IC8-RN offers 8 coaxial transducers, amplifiers, and DSP channels and up to 4 steerable beams, with beam control effective down to 800 Hz. This combination of flexible, programmable control and precision beam-steering enabled Croft to provide clear, intelligible sound throughout the sanctuary. And unlike the system they replaced, the ICONYX arrays’ slim, low-profile enclosures don’t distract from the sanctuary’s aesthetics.

“I was happy to be able to install the Renkus-Heinz ICONYX because it changed the whole nature of the sound,” declares Croft. “We’re very, very happy with the results,” Barry assures. “When I stand in the back and listen to a reader or a speaker, I couldn’t be more delighted. It’s so clear! The Renkus-Heinz has really solved one of our major technological problems, for which I’m very grateful.”