Stockmusic.net the Exclusive Music Provider for “All Things Post” 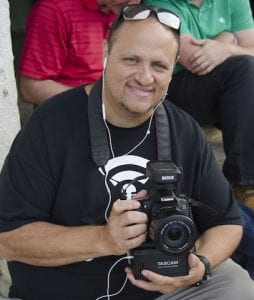 Orlando, FL—July 2018… In addition to creating high-end digital content for film, TV, and more, Wildstyle Media Group founder and Chief Creative Officer Niel J. Guilarte hosts All Things Post, a highly acclaimed podcast created for people working in audio post-production. His Facebook group for loyal All Things Post listeners has attracted more than 500 post-production professionals. “We also have started attracting a lot of assistant editors and editors of well known, scripted television shows like Supergirl and Empire,” notes Guilarte. “So our audience has shifted a bit toward a much higher-caliber editor, which is what we wanted when we started All Things Post. They’re a different breed, and they need a lot of music. Stockmusic.net is a great solution for them.”

Stockmusic.net licenses royalty-free music for television, film, advertising, games, and apps, as well as on-hold messaging and background music. But unlike conventional libraries, stockmusic.net custom curates only the best music and sound effects from top composers and sound designers. Every style and genre is represented.

A five-time Telly Award winner, Guilarte has been recording and producing since 1991. He was an early podcasting advocate and has become an influential podcasting coach, in addition to hosting All Things Post. “Podcasters and podcast producers increasingly need more and better music because they want more than just an intro and outro,” he observes. “Now there’s a big push for storytelling podcasts, sort of like Orson Welles’ radio programs back in the day, where the music and sound effects constantly change. Stockmusic.net provides podcasters with very high-quality original music in pretty much any genre they want. Media departments for municipalities need more and better stock music too. When I was editing for the Office of Communications for the Mayor of Orlando, we bought music in spades, and stockmusic.net is much better than the choices we had. In fact, I’ve been telling my old boss there about it.”

For busy editors and production people, time is money, and Guilarte says Stockmusic.net’s fast, intuitive search engine has paid for itself many times over. “Recently, I needed a Las Vegas-style song and a country song about a family blueberry-picking outing on a farm for my new vlog on YouTube,” he relates. “With most music libraries, when I do a keyword search, I get a dozen canned corporate tracks that are not what I’m looking for. With stockmusic.net, the keyword search pulls up a viable option right away. When I typed in the word ‘Vegas,’ I immediately got a Las Vegas song. When I put in ‘blueberry’ or ‘blueberry farm,’ boom, I got two blueberry-farm songs. With both searches, the first songs I auditioned were the ones I ended up buying. I got other options, and I listened to those choices, but both times the first search gave me the right track. The speed and ease of search was amazing.”

Stockmusic.net’s custom-curated music also makes a big difference for Guilarte. “They go out and find musicians who submit high-quality, custom tracks, unlike the canned music you get with other stock-music services and libraries,” he asserts. “The composers and the level of musicianship are excellent.”

Guilarte is so impressed with stockmusic.net that he is recommending it regularly to his students and colleagues, as well as in All Things Post. “This is what I use,” he declares. “I don’t use anything else now.”