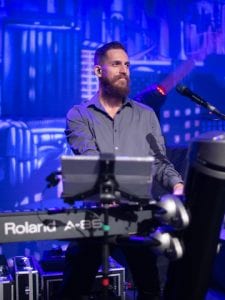 Brisbane, Queensland, Australia—April 2019… Stuart Tilsley was at a crossroads. His cover band, Magic Carpet Ride, plays corporate gigs around Queensland and beyond, but the manufacturer of the hardware-based VST host he had been using to cover his keyboard sounds had abruptly announced it was closing down. Suddenly, Tilsley needed to find a new way.

“I searched online for a VST host that would run on Windows and found Deskew Technologies’ Gig Performer,” Tilsley recalls. But as efficient as Gig Performer is, he still questioned whether an affordable laptop would have enough power to run all his plug-ins. “When you’re talking about lining up Synthogy Ivory, Spectrasonics Omnisphere, and a bunch of the Native Instruments virtual instruments to use live, you can’t expect to spend $1,000 on a laptop and have it work. For that, you need something more expensive with a more powerful processor.”

That financial plunge was an issue. “There’s another way,” he thought. So Tilsley and his brother built a Windows machine rivaling his old hardware box in power and cost. “I’ve got a custom PC in 2U of rack space,” Tilsley details. “It’s a Windows 10 computer with an eighth-generation, six-core i5 CPU, and two M.2 SSDs. We put it together for about $1,200, and it’s really good. My mate’s got a MacBook with an i9 and mine does a lot better than just keep up.”

Tilsley’s main controller is a Roland A88, supplemented with a Korg nanoKONTROL2. A Microsoft Surface Pro running Remote Desktop serves strictly as a touch controller for Gig Performer, eliminating the need to carry a computer monitor. “Gig Performer’s MIDI capability is unbelievable,” Tilsley marvels. “The pedals can do completely different things in each rackspace, whereas assignments are global with other gear I’ve used. It opens up my sound design much better than anything else I’ve ever tried.” (A Gig Performer “rackspace” is a complete configuration of plug-ins, including routing and MIDI control.)

In Gig Performer, onscreen rack panel controls called “widgets” link to real-time plug-in parameters and can be manipulated onscreen or mapped to MIDI controllers. “Most of my rack panels have widgets mapped to two Roland EV5 expression pedals. I might use one pedal to bring in a pad sound behind a piano and the other to fade in a brass sound. Or I might use a pedal to fade in a Leslie sound on an organ,” Tilsley explains. “I always have level-meter widgets to make sure I’m not peaking any channels, a reverb control, and a main output level control. For a Hammond sound, I’ll also have a panel with drawbars laid out to mimic the Nanocontrol’s sliders.” 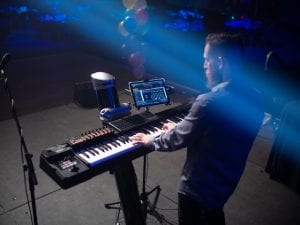 Tilsley sometimes uses text box widgets to help with unfamiliar material. “If I’m playing a song I don’t usually do, I’ll put a text label with the chords on a panel for a nice cheat note,” he offers with a grin.

When Tilsley gigs on someone else’s keyboard, he simply brings the Nanocontrol to the gig and employs Gig Performer’s Rig Manager to quickly map the controls to the new rig. “Since I use the sliders on the Nanocontrol for my organ drawbars, I just connect it to the keyboard controller, go into Rig Manager, move each slider once, and all of my drawbars are mapped for every rackspace,” he discloses.

Tilsley’s greatest satisfaction comes from Gig Performer’s ease of use. “What I love the best about Gig Performer is probably what the majority of people like the best, and that is the way you route everything. It’s so intuitive and straightforward; you just wire modules up by dragging from outputs to inputs. Gig Performer’s a piece of cake,” he glows.

Now, Tilsley is a believer. “I’m happy with Gig Performer, it does the job,” he attests. “And when there are bugs, as there are in any software, Deskew is on to them so quickly. They’ve given me amazing support, too.”