Symetrix’ Ease of Use Earns Raves at Arvada Presbyterian Church 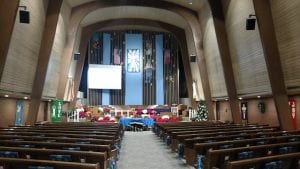 Arvada, CO—August 2018… Arvada began as a small town about seven miles northwest of Denver, less than six years before Colorado attained statehood in 1876. Incorporated in 1904, it once claimed the title of “Celery Capital of the World.” Today, Arvada is a thriving commuter suburb of 112,000 people. The Arvada Presbyterian Church goes back to Arvada’s early years, beginning in 1904 with a congregation of 14. Its current main building was dedicated in 1916, making it the second-oldest church building in Arvada. An education wing was added in 1952. As of 2016, the church boasted a congregation of 245 members.

Services are mostly traditional and feature a 20- to 30-voice choir. During the summer, the choir takes a break, and three to five praise singers lead worship. An electronic keyboard and an assortment of microphones are obvious concessions to modern technology. But behind the scenes, a state-of-the-art Symetrix Prism 12×12 DSP manages the church’s sound system, offering auto-mixing with a simple user interface, with access to deeper features when needed.

“The Arvada Presbyterian Church leaders developed their sound system over the years, as technology changed,” relates Dave Kistler, president of systems integrators Equalized Productions, which designed and installed the Symetrix system. “Their old system, which used an analog mixer, was being run by high school students. When the students went to college, two members of the congregation ran the system, which was okay until those two gentlemen retired and began traveling more often. So the church asked us to design a sound system that was completely automated and could be set up for a few different scenarios, using presets, so it would sound good without requiring somebody who’s knowledgeable about audio. They wanted access to the back end, with the EQs and limiters, but they don’t intend to mess with that for the most part. And they wanted a system that could be quickly and easily reset to its standard settings. Symetrix’ Prism DSP and SymVue software enabled us to provide all of that.”

The flow of the sound system is fairly straightforward. The church has an assortment of handheld and lapel wireless microphones, the lectern mic, choir microphones (pencil condensers), and wired mics for the praise singers, plus the electronic keyboard. All told, the system uses about 20 audio channels, so the Symetrix Prism 12×12 is connected via Dante to a Symetrix xIn 12 analog input expander, for a total of 24 analog inputs, leaving room for growth. The Prism’s analog outputs feed the church’s older Crown and QSC amplifiers, which in turn drive QSC speakers in the sanctuary and Atlas in-ceiling speakers in the lobby.

“After analyzing everything, we decided to leave the existing speaker and amplification system intact because it was robust enough and complemented the facility,” recalls Kistler. “That enabled us to avoid acoustical treatment. So the main item was the Symetrix Prism. We also added Slade power sequencing, so they can turn everything on and off from the booth, and we put an amp rack in the back room. They had traditional two- or three-gang faceplate floor boxes and had problems with people breaking the mic connectors, so we installed recessed floor boxes.”

For easy and intuitive control, the Equalized Productions team provided a Dell touchscreen PC running Symetrix SymVue software. “They log into their computer, launch the application, and enter in a four-digit PIN for security purposes,” Kistler details. “That brings up a screen that allows them to go into the front-of-house mixer, the stage floor-monitor mixer, and the choir monitor mixer, each of which is independently mixed in the Symetrix Prism using the touchscreen. Preset buttons call up the different situations they’ll encounter. For example, there’s a preset for the school year, when the choir is performing, and another preset for the summer, when the praise singers are performing with handheld, wired mics.”

Symetrix DSPs are Equalized Productions’ regular go-to systems, and the Prism proved an excellent choice for Arvada Presbyterian Church. “We choose Symetrix primarily for the ease of programming,” Kistler explains. “It just makes sense. SymView was the key component that allowed us to go into the mixer and control everything. Creating the back end is so much simpler than with other DSPs. With Symetrix, I can clean up the console, so when the client launches the virtual mixers, everything is simple. I can get rid of the Solo button, the Level button, and anything else they might hit that could mess things up. We label the mixers with the channel number that is associated with the floor box, and we create labels that makes sense to them, like ‘This is Pastor Bill’s mic.’”

Kistler’s team used SymView to enable the client to log into the mixing console, mix as they wish, and then reset the system with one preset. “They also have an Admin console where they can adjust the EQs, limiting, gating, and so on,” Kistler adds. “They didn’t want to control all that stuff but they wanted to be able to see it. So they have two separate SymViews that they can log into: One is for regular control and one is Admin.”

By doing all mixing and processing in the Prism, Equalized Productions was able to remove not only the old analog mixer but old rackmount gear, such as graphic EQs. “We took 32 spaces of equipment down to 2,” Kistler details. “Overall the new system looks simple and appealing. During training, they wanted us to demonstrate messing the entire mix up and then resetting the system to get back to safety. The way we programmed the Symetrix system, they hit one preset button, and that happens. They loved it; they were raving about it. That’s what’s great about the Symetrix system.”