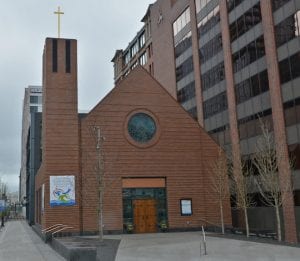 South Boston, MA—June 2018… When the 214-seat Our Lady of Good Voyage Shrine opened on Seaport Boulevard, near the Evelyn Moakley Bridge, in April 2017, it provided a valuable spiritual meeting place for the diverse, up-and-coming Seaport District. Replacing an older chapel on Northern Avenue that made way for new development, the beautiful shrine retains a marine flavor, including a ceiling that resembles the hull of a wooden boat and a wooden statue of the Virgin Mary as Our Lady of Good Voyage, holding the infant Jesus in one hand and a ship in the other. Some windows and furnishings were retained from nearby parishes that have closed in recent years.

Our Lady of Good Voyage’s new sound system, designed and installed by Landry Audio Corporation of Millis, Massachusetts, also combines old and new. “The Archdiocese of Boston originally asked me to be the audio systems coordinator but by the time they were ready to move forward, I had started Landry Audio and installed several systems in churches in the area, so they asked me to handle the entire design and install,” recounts Landry Audio president Evan Landry. “They had a Bose system with Panaray MA12 line arrays in a church that had recently closed, and we were able to reuse four of those for the main system and power them with the old church’s QSC power amps. The Archdiocese was especially committed to installing a state-of-the-art, energy efficient, and convenient system that respected the integrity of the worship site and promoted an inviting experience for worshipers.” 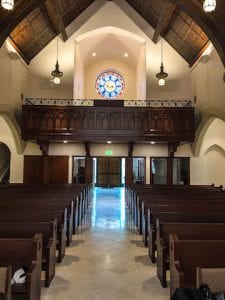 Reusing the old equipment saved enough money that Landry could install a new Symetrix Radius 12×8 EX DSP to manage the system, along with Dante-enabled Stewart FLX80-4-LZ-D four-channel power amps to drive fill speakers. He also installed a pair of Attero Tech Dante-enabled wall plates. “We put an Attero Tech unDX4I audio wall plate in the choir loft, giving them four balanced mic/line inputs for choir mics,” he offers. “We also installed an Attero Tech unD3IO wall plate in the sacristy, which gives them an XLR input, an XLR output, and a pair of RCA inputs. The XLR output was especially handy on dedication day because the press was there, and I used it for a press feed. A CD player plugs into the RCA inputs so they can play Gregorian Chant during the day. They also have a DI box that can plug into the unD3IO in case they want to plug in a phone.”

Landry discovered Symetrix when a church where he worshipped had a Symetrix DSP installed by a local integrator. “The sound was awful at first because the programming wasn’t right,” he recalls. “I was asked to fix it, and I had never seen a Symetrix DSP, but I did a web search, downloaded Composer, and started figuring it out. A friend who does SMAART calibration came in with his measurement mic, and with his data, I was able to program the Symetrix DSP in Composer to fix the system, even though I had no Symetrix training.”

Susan Rullo at Symetrix regional rep Cardone, Solomon & Associates learned of Landry’s successful rescue of the church system and suggested he get formal Symetrix Composer Certification Training. “So I did,” Landry relates, “and I started getting work as a Composer programmer. I’ve installed a dozen Symetrix DSPs in the last year or so. In addition to being easy to program, they sound great, and I like the Dante features. Symetrix has a library of Composer modules from other manufacturers, including Attero Tech and Stewart Audio, that make it extremely easy to integrate third-party devices over Dante, even without Dante Controller. They become part of the drag-and-drop interface, as if they were Symetrix devices. For all of these reasons, I prefer Symetrix DSPs and chose the Symetrix Radius 12×8 EX for Our Lady of Good Voyage’s system.” 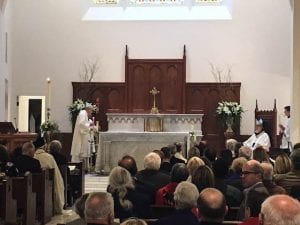 Rullo also told Landry about Attero Tech. “Attero Tech has a variety of solutions for the situations I often run into,” he enthuses. “They all work well, they’re reasonably priced, they combine well with Symetrix DSPs, and the sound quality has always been great. I don’t know of anyone who makes wall plates that are as good for the price.”

In addition to the main system, Landry installed a pair of Bose Model 32 flush-mount speakers rescued from the old church as choir loft fills and additional salvaged Model 32s in the narthex and in the Our Lady of Good Voyage shrine along the side of the sanctuary. All of the Model 32 speakers are powered by Stewart amplifiers. “I didn’t use the DSP in the Stewarts, though,” Landry notes. “The Radius 12×8 EX handles all of that.”

Overall, then, analog audio comes in through the Attero Tech wall plates, streams via Dante to the Symetrix Radius 12×8 EX DSP, out via Dante to the Stewart amps and analog to the QSC amps, and then to the speakers. A Cisco switch connects all Dante-enabled gear.

It was a lot of work but Landry had the system up and running in time for the shrine’s dedication in April 2017. “We finished the end of March,” he concludes. “It took us a little while to tune it, and the opening day was a bit rough. But then we got the Composer fine tuning right, and they’re really happy with it.”