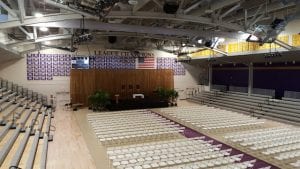 San Diego, CA—May 2018… Part of the Roman Catholic Diocese of San Diego, St. Augustine High School moved to its current Nutmeg Street location in 1923. The first private school admitted to the San Diego City League of Athletics, its sports program is one of the finest in the city. The school recently opened a new athletics building centered around the Fr. John R. Sanders Gymnasium, plus team rooms, locker rooms, a training room, a V.I.P. room, multiple offices, and a functional lobby that can be used for small events.

Nationally renowned AV systems integrator Sound Image designed and built a Dante-enabled sound system, managed by two Symetrix Radius 12×8 EX DSPs, that serve the gym and ancillary rooms throughout the new facility. “This was a design-bid-build project,” clarifies Michael Fay, who was Senior Design Consultant at Sound Image during the project, and responsible for the audio, video and acoustic designs. Fay is now, he says, “three-quarters retired” but still consults on projects independently through his firm GraceNote Design Studio.

The Sanders gymnasium is exceptionally nice. It can seat up to nearly 3,000 when chairs are set up on the main floor, and the school also uses it for church services and other large events, so the sound system needed to be configurable in several ways.

During games, sound is primarily distributed to the bleacher areas, as well as routed to the 70 volt systems in the ancillary rooms. Events that use both floor and bleacher seating are focused on a stage location at one end of the gym. Fay designed the speaker placement, aiming, and timing with these two basic setups in mind, creating six coverage zones of Bose RoomMatch-series arrays, driven by Dante-enabled Bose PowerMatch-series amplifiers. He used Symetrix SymVue software to create multiple scenes and controls that configure the room for various events. Some events run hands-free, while other are mixed with a Dante-enabled Yamaha TF3 console. For games, wireless mics and music tracks are mixed through the Symetrix Radius, using its gain-sharing automix module. 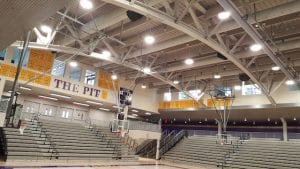 “SymVue is running on a Wi-Fi-enabled tablet computer to control minor level adjustments, while Crestron XPanel software controls a video projector, switcher, and screen,” Fay details. “For instance, there’s a preset on both the SymVue and XPanel GUIs labeled ‘Large Event.’ These synced presets push the various configuration commands to the Radius devices and the video system. The screen drops, the projector turns on, a computer input is selected, the FOH console is live, and the proper loudspeaker zone configuration is recalled. Each subsystem has basic override controls through the GUIs.”

Upstairs, overlooking the gym, are several classrooms, including a large classroom that can be subdivided with an air wall. “There are more ceiling speakers in the subdivided room than can typically be controlled by a single 70 volt volume control.” notes Fay, “so we used two Symetrix ARC-2e wall panels up there, one for each side. That way, they can mute the speakers in the individual rooms or do independent volume control when they use the air wall.” Levels in most other ancillary rooms are controlled with regular 70V attenuators.

A third Symetrix ARC-2e wall panel controls the gym feed and local input levels for the ceiling speakers in the lobby. “The lobby is the main entrance, and it’s designed like a high-end hotel or corporate lobby, so it’s functional and aesthetically pleasing,” observes Fay. “The lobby can handle overflow for the gymnasium or it can be a classy, standalone area for small pregame events. An 80-inch video monitor can hook up to a portable computer or display a video feed from the game court. There’s a Dante patch, so they can bring in the Yamaha console, and local wired mic inputs with mutes and volume controls on the ARC-2e wall panel. The wireless mics work in that room, too.”

Fay has been a Symetrix fan from way back. “When audio DSP products first hit the market,” he recalls, “Symetrix consistently had hardware that I liked, and their products have continued to mature with the industry. I tried many other brands but Symetrix DSPs make the most sense to me. Their software has always been easy to use, and as you gain experience, it gets even easier. Composer software has one of the most robust and mature collections of device algorithms and logic hooks. I can take a device and break it apart, just use part of it for a custom user interface, and still retain all the functionality under the hood. Symetrix DSPs are priced fairly, they sound good, and they offer lots of I/O options. And, I almost always have need for their ARC wall panels.” 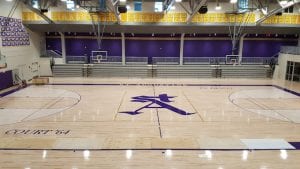 Fay also praises Symetrix’ Dante implementation and support. “At St. Augustine, the Dante aspects came together without any sleepless nights, and Symetrix tech support is good. When I come up with some wacky idea that I can’t quite get to work right, they always help me figure it out.”

This project also included a fair amount of opportunity-based acoustic conditioning, much of which is hidden behind perf-metal overhangs and the bleachers. “It was an interesting job and well worth the effort,” insists Fay. “The system works well, it sounds really good, and the client is very happy.”