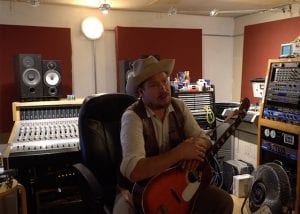 Allen, OK—September 2018… Having grown up in part on his grandparents’ farm, RT Valine is in some ways a classic old school folk and country singer/songwriter, with a deep, rich voice that conjures memories of Johnny Cash. He and his band RT N’ The 44s (Valine, Michael “Swimmy” Webb, and Brendan Willard) have variously been described as “folk noir” and as “a vintage country band with dark obsessions.” Like so many artists, Valine gravitated to the Los Angeles music scene, busking and playing his original songs at an assortment of venues. After gigging on the L.A. scene for several years and releasing an impressive number of records, he relocated to Oklahoma, where he now is based.

Unlike most singer/songwriters, though, he and RT N’ The 44s often perform on instruments Valine constructs out of salvaged pieces of metal, wood, and other found materials. “Around 2009 I started building a lot of my own instruments,” he recounts. “I made banjobasses, standup basses, guitars—just junk instruments out of scrap. It lends itself to a pretty interesting sound. That’s how we got started. It was a lot of fun; it was something different. It was entertaining for us and for other people.”

That same DIY spirit also informed RT’s recording ethos, with many of his early tunes created on his trusty TASCAM Portastudio. “We started out doing all our recordings with a TASCAM 626 Portastudio, and TASCAM has been integral in my development since,” he asserts.

Having honed his recording skills with the 626 Portastudio, Valine made the leap to computer recording. “I started using TASCAM interfaces,” he reveals. “That was really important to me because when I had a song idea, I was able to get the whole thing down, all the parts. I recorded the harmonies, the rhythms, and the melodies for the other instruments as a sketch and then shared it with the band. That saves a lot of rehearsal time.” 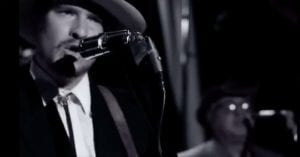 Recently, Valine has discovered the advantages of capturing live gigs with the latest in handheld digital recorders. “We recorded live at The Escondite in downtown Los Angeles using the DR-44WL handheld recorder,” relates Valine. “It really works well for remote recording applications.”

With four recording tracks, built-in stereo condenser microphones configured in a true XY pattern, two locking XLR combo inputs, and TASCAM’s premium preamps, the DR-44WL is a versatile, 24-bit, 96 kHz digital recorder. Highly portable, it can be remote controlled from an iOS or Android device using a free app and can operate for more than 16 hours using AA alkaline batteries—more than enough to capture virtually any gig. “We simply stuck the DR-44WL up in a corner of the room and had somebody control it from one of the booths in the bar,” recalls Valine.

True to his low-fi style, Valine wouldn’t simply use the DR-44WL tracks as is. “We mixed the DR-44WL recording with the board mix, and of course I roughed it up a bit,” he chuckles. “I didn’t want it to sound as clean as the TASCAM recorder sounds.”

From the 626 Portastudio to computer recordings with TASCAM interfaces and location recordings with the DR-44WL, muses Valine, “TASCAM has been with me since the inception of my music career. And as I’ve grown, TASCAM has been there every step of the way. TASCAM taught me and led me to where I am today.” And where is that? Valine laughs good-naturedly. “Thanks, TASCAM,” he replies with a wink.