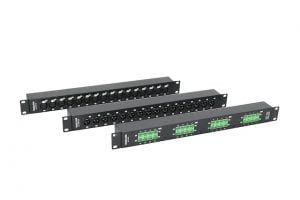 TASCAM’s ML-32 analog/Dante converter inserts 32 channels of audio into a Dante stream and extracts 32 channels from a Dante stream, using DB25 connectors. The ML-16 offers 16 channels of input and 16 channels of output on DB25s. Both converters feature dual redundant Ethernet jacks that support primary and secondary connections; handle up to 24-bit, 96 kHz digital audio; and are AES67- and Ravenna-compatible. With the addition of the BO-series breakout boxes, the ML-32 and ML-16 provide an all-TASCAM solution that can be interfaced with a wide variety of audio devices, including direct connection to a TASCAM’s DA-6400 64-channel digital multitrack recorder/player without requiring its optional Dante card.