University of Toledo Learns the Value of ICONYX 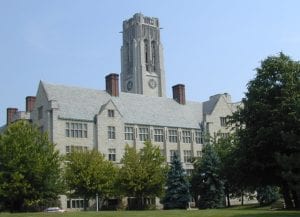 Toledo, OH—September 2018… One of 14 state universities in Ohio, the University of Toledo is 20,500 students strong, with more than 300 undergraduate, graduate, and professional programs, several of them nationally ranked. Nestled on the south bank of the Ottawa River, the university’s Lancelot Thompson Student Union is the heart of activity on the main campus.

The second floor of Student Union’s south wing terminates at the Dr. Lancelot C.A. Thompson Meeting Room, a multipurpose space that hosts meetings, training sessions, and conferences. For many years, AV in the meeting room was handled with an aging projector on a rolling cart, taped down cables, a white screen, and intercom-style loudspeakers. But recently, the university tapped full-service commercial AV systems integrator ProVideo of nearby Perrysburg to bring the space’s AV technology up to date. ProVideo Executive Sales Engineer Kevin Olden designed the new system based on Renkus-Heinz ICONYX Gen5 digitally steered array loudspeakers.

At first glance, the meeting room’s acoustics appear straightforward, albeit with a lot of hard surfaces—until you look up at the center of the ceiling. “The room has a lot of really nice maple wood and chandeliers, so it looks good, but there’s no acoustical treatment, so it’s very noisy,” Olden observes. “The odd part is the gap in the middle of the ceiling, leading to an upper chamber and a pointed apex ceiling above. That didn’t make the acoustics any easier. When I first saw the room, Renkus-Heinz ICONXY IC16-RN arrays immediately came to mind because they gave us the ability to steer the sound toward the floor and away from the hard surfaces and ceiling. Before we installed ICONYX, that upper chamber was in play. With ICONYX, we aimed the beams to keep the sound down on the seats, and the chamber is not so much in play now.”

Some meeting room events are in the round, while others have up to 250 seats facing the front screen. ProVideo’s team mounted a pair of IC16-RN columns left and right of the lectern area, covering the entire room evenly without fills. “In most cases, the presenter or speaker is going to be located in the lectern position, right in front of one of the loudspeakers,” points out Olden. “The ability to aim the beams for the best operation in that situation, while also considering the multifunction uses of the room, was pretty important.”

Speaker placement turned out to be one of the easier decisions. “When I looked at the space, speaker placement almost presented itself,” Olden confirms. “The locations on the short walls to the left and right of the lectern were almost a perfect choice. And the white IC16-RNs match the white walls, so they blend nicely without requiring custom paint.” 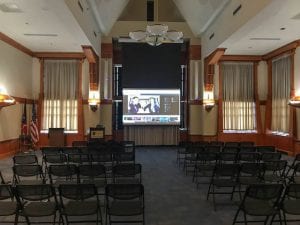 For video, Olden chose a matte white Da-lite 70192LSC 16:10 screen with a custom black drop that makes the new screen almost appear to be coming out of the ceiling. A Panasonic PT-RZ770 laser projector sits on a custom-designed shelf over the doorway in the rear of the room, about 60 feet from the lectern. A Crestron DMPS3-4K-250-C 3-Series 4K DigitalMedia Presentation System 250 handles 4K AV presentation control and signal routing, and a custom floor box provides HDMI and VGA connections.

“A presenter can put a laptop on the podium and plug in, and whatever flavor they use, VGA or HDMI, will auto-select for the projector,” notes Olden. “I considered putting in a DSP and decided we didn’t need it. We used a bit of the processing abilities of the DMPS3-4K-250-C but most audio processing is done in the Renkus-Heinz speakers.”

A Crestron TSW-1060-NC-B-S 10.1-inch touch screen control panel is discreetly mounted on the columns behind the house left side of the lectern, facing to the side. “They have controls for two legacy Audio-Technica mics and Shure MX wireless handheld and lavalier mics,” Olden recounts.

Olden sums it up: “In a world where stuff doesn’t always happen like you plan it, we can rely on Renkus-Heinz equipment. In the Thompson Meeting Room, the IC16-RN loudspeakers were one part of the project that worked and sounded as we expected. Out of the box, the speakers worked seamlessly. The manual is very clear about how to get started, and it’s pretty painless. Although that is the way it should be all the time, it isn’t, so that’s a real bonus. We’ve definitely become an evangelist for the Renkus-Heinz ICONYX line.”