With ICONYX, Pastor’s Message is Finally Heard at Church of the Holy Cross 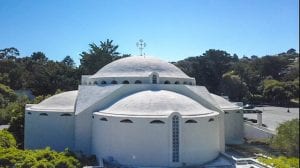 Belmont, CA—July 2018… Since its construction and dedication in 1964, the Byzantine-style sanctuary of the Greek Orthodox Church of the Holy Cross has graced the city of Belmont, California. The church’s cruciform design features a center dome, surrounded by four half-domes, all with hard surfaces, which focus sound in a way that works very well for choir, organ, and chanting.

Spoken-word intelligibility is another matter, however. “Most of the Orthodox liturgy is chanted,” notes Church of the Holy Cross parishioner Jim Smith. “There’s a lot of music, and that’s usually not a problem. But there are a couple of times during the service where Father speaks to the congregation, and nobody could understand what he was saying.”

“Every Sunday people were telling me that they couldn’t understand what I was saying in the sermon,” confirms the Reverend Father Peter Salmas, who has served as pastor since 1988. “We did a lot of different things to try to improve the sound, and although the volume went up, the intelligibility did not change.” 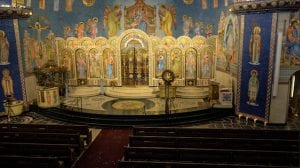 “I could immediately see the Church of the Holy Cross was going to be an acoustically challenging space, with those domes and acoustically hard spaces,” observes Layer 8 president Rocky Giannetta. “The space sounds about five times larger than it actually is,” details Spider Ranch Productions Senior Engineer Mark Sweet. “Even when one person is speaking to another from five or ten feet away, many times it’s problematic.” Mulling over the challenges, Sweet remembered a successful demonstration he did with ICONYX several years earlier, in a different church. “In a room that seated about 1,500 people, ICONYX was amazing,” he recalls. “Even at 100 feet, the source sounded like it was only about 10 feet away. I knew if ICONYX would work in that room, it would work effectively in this room.”

The Renkus-Heinz IC24-RN loudspeakers chosen for the Church of the Holy Cross employ 24 4-inch coaxial transducers, each with 3 high-frequency tweeters. Each coaxial transducer has a dedicated power amplifier and DSP channel. One array can generate up to 12 steerable beams, each of which can be individually shaped and aimed. As a result, sound could be directed at the church’s pews and away from the reflective surfaces. This precise steering, combined with the clarity for which Renkus-Heinz ICONYX arrays are famed, provided the speech intelligibility the church had sought for so many years. “The feedback we’ve gotten from the congregation has been that it’s a night-and-day difference,” Smith reports.

“I was very impressed with the fact that no matter where you sit in the church, the sound is not only intelligible, but it seems that the volume of the sound and the quality of the sound are the same,” praises Father Peter. “It doesn’t diminish if you are in the first pew or the last pew. When we started using the Renkus-Heinz system, it was the first time in the nearly 30 years that I’ve been here that the congregation finally understood what I was saying.”